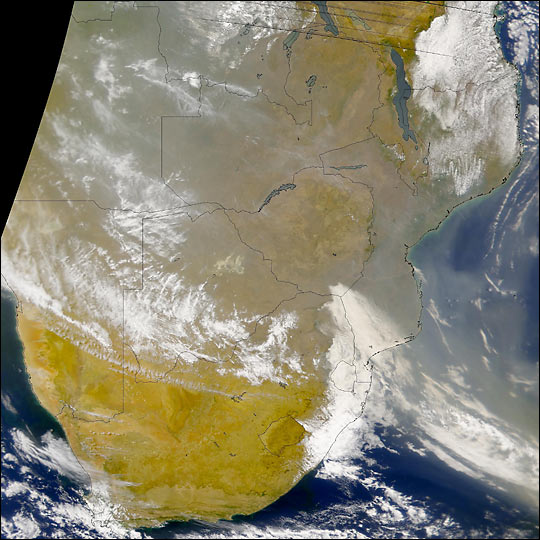 This SeaWiFS true-color image acquired over Southern Africa on Sept. 4, 2000, shows a thick shroud of smoke and haze blanketing much of the southern half of the continent. The smoke in this scene is being generated by a tremendous number of fires burning over a large area across the countries of Angola, Zambia, Mozambique, Zimbabwe, Botswana, and the Northern Province of South Africa. In this image, the smoke (grey pixels) is easily distinguished from clouds (bright white pixels). Refer to the Images & Data section for a larger scale view of the fires in Southern Africa.

Data from both the SeaWiFS and Terra satellites are being used by an international team of scientists participating in the SAFARI field experiment. The objective of SAFARI is to measure the effects of windblown smoke and dust on air quality and the Earth's radiant energy budget.

This image was produced using SeaWiFS channels 6, 5, and 1 (centered at 670 nm, 555 nm , and 412 nm, respectively). The data were acquired and provided by the Satellite Applications Center in Pretoria, South Africa.