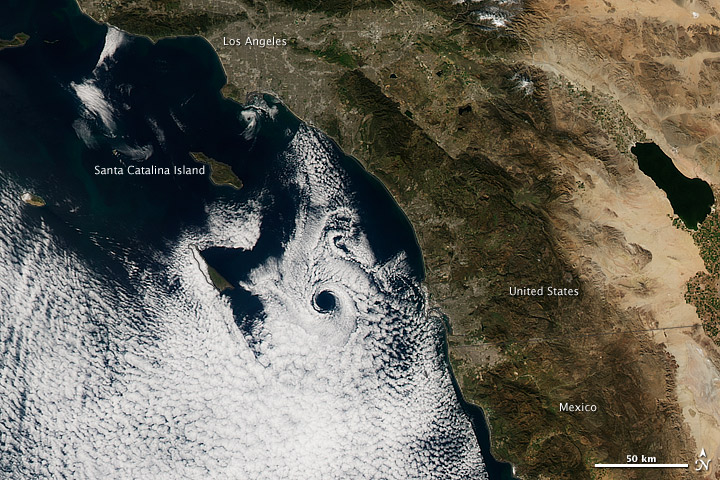 On February 17, 2013, the Moderate Resolution Imaging Spectroradiometer (MODIS) on NASA’s Aqua satellite captured this natural-color image of an atmospheric eddy off the coast of Southern California. The swirling, circular pattern in the clouds was due west of San Diego when Terra flew over around local noon.

The pattern is known to meteorologists as a Catalina eddy, or coastal eddy, and it forms as upper-level flows interact with the rugged coastline and islands off of Southern California. The interaction of high-pressure—bringing offshore winds blowing out of the north—and low-pressure—driving coastal winds blowing out of the south—combine with the topography to give the marine stratus clouds a cyclonic, counter-clockwise spin. The eddy is named for Santa Catalina Island, one of the Channel Islands offshore between Los Angeles and San Diego.

Catalina eddies can bring cooler weather, fog, and better air quality into Southern California as they push the marine boundary layer further inland. These mesoscale eddy patterns can stretch across 100 to 200 kilometers (60 to 120 miles) and can last from a few hours to a few days. They most often form between April and October, peaking in June.

A downloadable time-lapse video from the GOES-West weather satellite is linked below the image and shows the evolution of the eddy over roughly eight to ten hours. Images of the pattern in other wavelengths are available on the CIMSS Satellite Blog. And you can watch a short video here describing how the eddy develops.

Off the Southern California coast, the interaction of winds, weather systems, and coastal topography create atmospheric vortices and eddies. 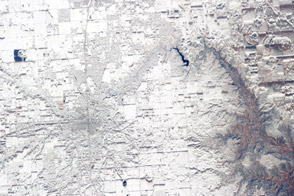