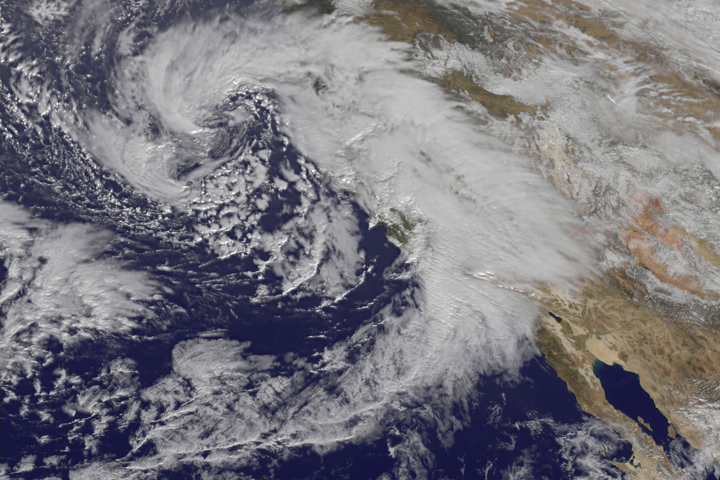 A tornado-like storm that, according to eyewitness reports, flipped a sport utility vehicle in Sunset Beach and lifted boats out of the water along the Pacific Coast Highway was just part of the excitement in California on January 19, 2010. Forecasters warned that residents were in for several days of severe storms that would bring high winds and heavy rains.

The Geostationary Operational Environmental Satellite (GOES)—built and launched by NASA, operated by the National Oceanic and Atmospheric Administration—captured a series of images of the storm activity between January 19 and 21, 2010. This image is a GOES-MODIS composite from January 20. The GOES satellite’s vantage point is over the Pacific Ocean, west of the California coast, and the image captures an apostrophe-shaped cloud bank over the coast. Animations (see links above) show successive waves of storm clouds breaking over California between January 19 and 21, 2010.

On January 19, the National Weather Service reported rain totals of 1.10 inches (2.79 centimeters) at Fullerton Airport, 1.38 inches (3.51 centimeters) at Modjeska Canyon, and 1.15 inches (2.92 centimeters) at Palomar Mountain. Heavy rains continued over the next two days. Thunderstorms knocked out power in Northern and Southern California, and flooded streets in the Los Angeles area. Authorities ordered hundreds of residents of the Los Angeles foothills to evacuate ahead of potential mudslides from areas devastated by the Station Fire, which had scorched the area months earlier. As of January 21, forecasters were warning Californians to brace for yet another storm.