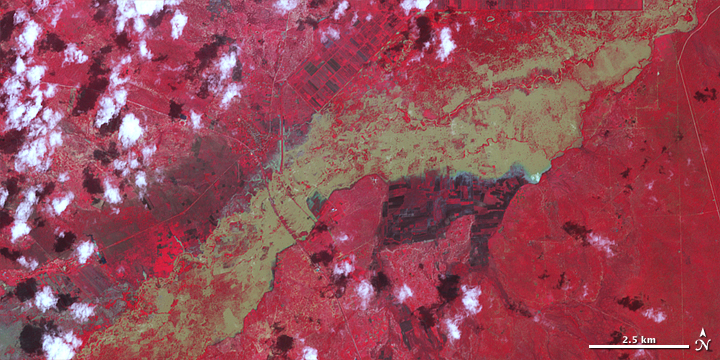 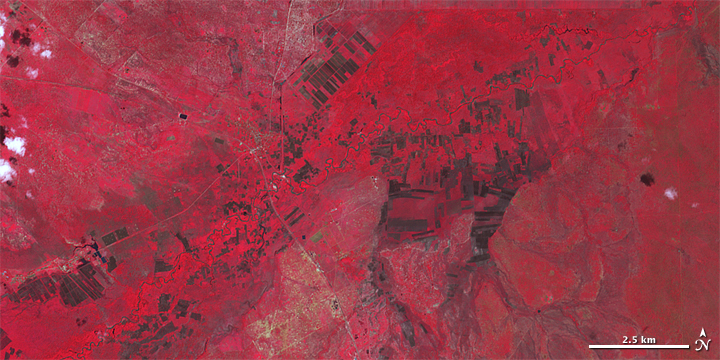 By mid-January 2010, several weeks of heavy rain had destroyed homes, crops, pastures, roads, and bridges in Tanzania. The heavy rains had affected an estimated 40,000 people, many of whom lost their homes, and academic terms had to be delayed as displaced residents sought shelter in schoolhouses, according to news reports.

The Advanced Spaceborne Thermal Emission and Reflection Radiometer (ASTER) on NASA’s Terra satellite captured these false-color images on January 15, 2010 (top), and January 21, 2003 (bottom). In these images, red indicates vegetation, and croplands appear as rectangles of red or gray. In both images, white clouds cast their shadows onto the land surface below. Pale brown indicates muddy water, which is prominent in the image from January 2010. Acquired at the same time of year, these images show the dramatic impact of heavy rains that pushed rivers over their banks and onto nearby floodplains in 2010.

This image shows an area in north-central Tanzania, at approximately 6.43 degrees south and 37.61 degrees east. Some of the hardest hit residents lived in central and southern Tanzania.

Acquired in January 2010 and January 2003, these false-color images show a region in north-central Tanzania before and after a flood. Red indicates vegetation, and brown indicates muddy water.