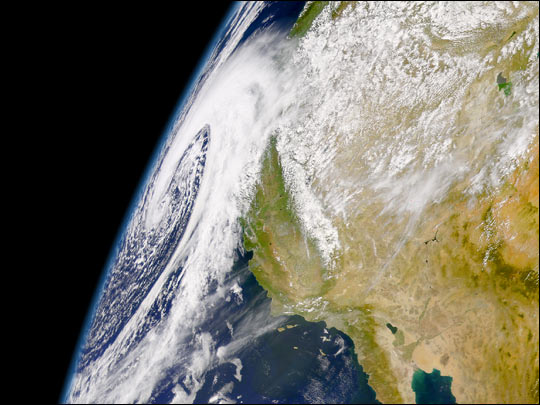 Monterey Bay, Point Conception, and Los Angeles are visible along the California coast below the storm. Inland, the thick white vertical stripe is the Sierra Nevada Mountains, still covered in snow. To the right of Los Angeles is a dark irregular feature—the Salton Sea. Below the Salton is a region of irrigated cropland that produces fruits and vegetables throughout the winter.

There appears to be a significant amount of biological activity in the Pacific Coastal waters around the Channel Islands, off California’s southern coast as well as in the Gulf of California. Note the dark green and turquoise patterns in the water, indicating the presence of phytoplankton blooms.