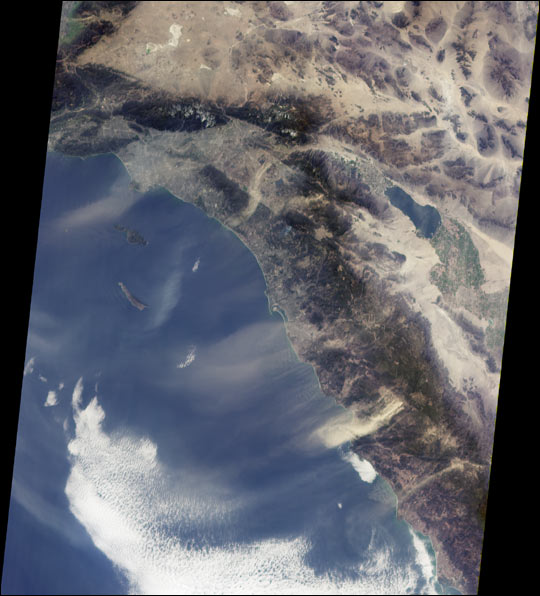 Southern California’s “Santa Anas” are dry, north-easterly winds having speeds in excess of 25 knots (46 kilometers/hour). Santa Ana conditions are commonly associated with gusts of more than twice this level. These offshore winds usually occur in late fall and winter when a high pressure system forms in the Great Basin between the Sierra Nevadas and the Rocky Mountains. The air warms as it flows downslope from the high plateau, and its speed increases dramatically when forced through narrow canyons and mountain passes. Due to Southern California’s uneven terrain, the strength of the winds varies greatly from place to place, and the Santa Anas can be sufficiently strong to pick up surface dust.

This view from the Multi-angle Imaging SpectroRadiometer shows the pattern of airborne dust stirred up by Santa Ana winds on February 9, 2002. The image is from MISR’s 70-degree forward-viewing camera, and airborne particulates are especially visible due to the camera’s oblique viewing angle. Southeast of the Los Angeles Basin, a swirl of dust, probably blown through the Banning Pass, curves toward the ocean near Dana Point. The largest dust cloud occurs near Ensenada, in Baja California, Mexico. Also visible in this image is a blue-gray smoke plume from a small fire located near the southern flank of Palomar Mountain in Southern California.

This image represents an area of about 410 kilometers x 511 kilometers.