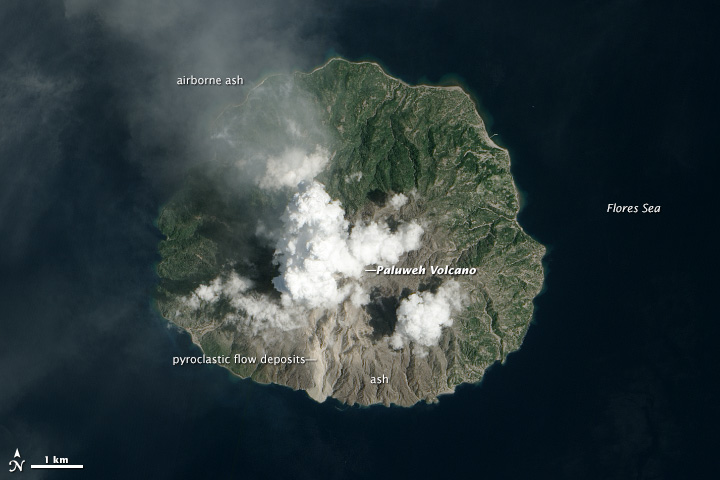 Although the summit of Paluweh (also known as Rokatenda) is shrouded by clouds, evidence of a recent eruption is visible in this satellite image of the Indonesian volcanic island. After rumbling for months, Paluweh released an explosive eruption on February 2 and 3, 2013.

Gray ash covers the southern slopes of the peak in this natural-color image. A lighter gray swath running from the summit (shrouded by the plume) to the ocean traces the path of a volcanic landslide, likely the remnants of a pyroclastic flow. A new delta extends into the Flores Sea at the foot of the flow. To the northwest, airborne ash swirls around the island. Green vegetation appears relatively untouched, but ash has destroyed many of the island’s crops, according to The Jakarta Globe.

Erik Klemetti, author of the Eruptions Blog, suggested that the eruption at Paluweh may have been caused by the collapse of an unstable lava dome. The number of small tremors and emissions of ash increased in October 2012 and continued into February 2013, perhaps indicating growth of the lava dome.

The image above was collected on February 12, 2013, by the Advanced Land Imager (ALI) on the Earth Observing-1 (EO-1) satellite. According to the Darwin Volcanic Ash Advisory Center (VAAC), Paluweh has experienced minor ash and gas emissions almost daily since the initial blast. 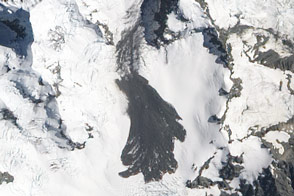 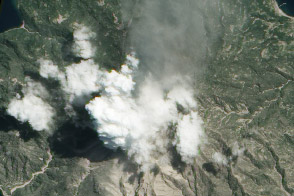 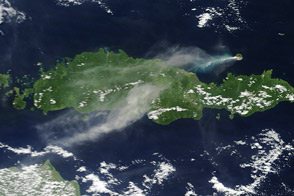