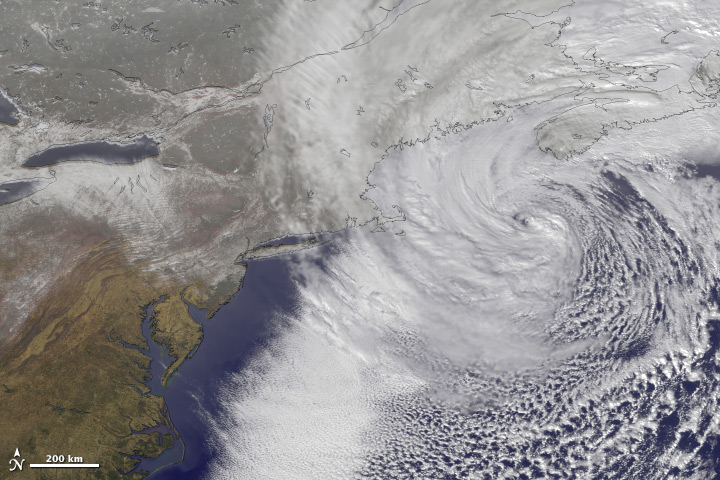 In early February 2013, a potent storm with hurricane-force wind gusts pounded the northeastern United States for the second time in four months. Snowfall was reported in fourteen states from Wisconsin to the Atlantic Coast, from North Carolina to Maine, with the most prodigious totals in the New England coastal states. As meteorologist Jeff Masters of Weather Underground put it, the snowfall from this blizzard was measured in feet, not inches.

The image above and the movie below show the development of a severe winter storm over the northeastern United States as captured by the GOES-13 (or GOES-East) geostationary weather satellite. The still image was captured at 1:15 p.m. Eastern Standard Time (EST) on February 9, 2013. The time-lapse animation is made up of images taken every 15 minutes from 12:01 p.m. EST on February 7 to 11:15 a.m. on February 10. Note how a weather front near the Great Lakes merges with a weather front moving up from the southeastern United States, eventually becoming one storm with the counter-clockwise rotation characteristic of a nor’easter.

The central pressure of the storm fell to 971 millibars at 7 a.m. on February 9, a level usually recorded in category one hurricanes. Significant wave heights over 30 feet were measured in Massachusetts Bay, and a storm surge over 4 feet inundated many of the north- and east-facing towns on Cape Cod and eastern Massachusetts. At some points in the video above, the storm appears to rotate around central eye—it was a shallow area of warm air was trapped near the center—though meteorologists such as Masters pointed out that the storm was not otherwise comparable to a tropical cyclone in structure.

Hurricane-force gusts were recorded in 12 locations, including 83 miles per hour at Cuttyhunk Island in Massachusetts and 82 mph in Westport, Connecticut. The combination of heavy, wet snow and gale- to hurricane-force winds snapped trees and power lines across the region and led to power outages for hundreds of thousands of residents as temperatures dropped 10 or more degrees below freezing.

Visit our natural hazards gallery for other images of the storm.

This time-lapse animation shows the merging of two storm fronts into a potent blizzard in February 2013.