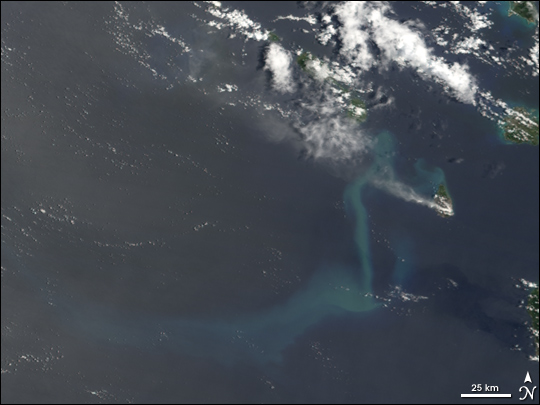 On Saturday, May 20, 2006, Montserrat’s residents were warned to stay inside as the Soufriere Hills Volcano covered much of the small Caribbean island in 5 to 7 centimeters (2 to 3 inches) of volcanic ash and pebbles. Likewise, air traffic was stopped in the area after the eruption spewed volcanic ash 16 kilometers (10 miles) skyward. Volcanic ash is not really ash at all, but tiny, jagged particles of glass, rocks, and minerals that damage respiratory tracts. Thick clouds of volcanic ash also pose hazards for aviation, both in terms of visibility and aircraft engine damage.

The Moderate Resolution Imaging Spectroradiometer (MODIS) flying onboard the Terra satellite took this picture of the island of Montserrat on May 22, 2006. In this image, a white plume, likely composed of volcanic ash and steam, flows from the summit. A trail of sediment, appearing in pale blue-green, appears to flow away from the island in the ocean currents. As the volcanic eruption produced debris that rolled down the side of the volcano, it is possible that some of this sediment results from that debris.