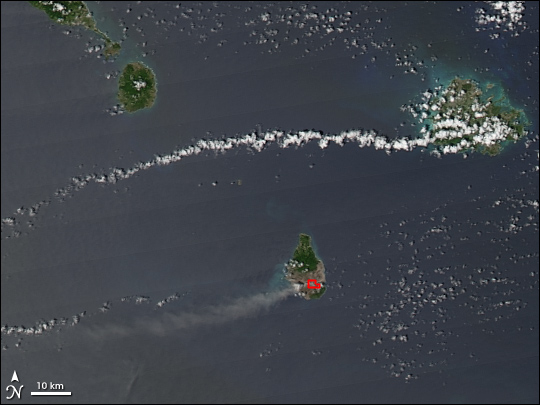 The Soufriere Hills Volcano on the island of Montserrat produced a plume of volcanic ash and/or steam on October 1, 2006. This event was part of a continuing pattern of intermittent eruptions from the volcano. The Moderate Resolution Imaging Spectroradiometer (MODIS) flying onboard the Aqua satellite took this picture the same day.

In this image, the island of Montserrat shows an area outlined in red, where the MODIS sensor detected a thermal hotspot—an area with a significantly warmer surface temperature than its surroundings. The plume of volcanic ash blows westward over the Caribbean Sea, gradually dissipating as it moves away.

The Soufriere Hills Volcano is a stratovolcano composed of alternating layers of hardened lava, volcanic ash, and rocks. No recorded eruptions of the volcano occurred before 1995, but since then, volcanic ash emissions have posed recurring health hazards for Montserrat’s residents, including eye and respiratory tract irritation.

The Soufriere Hills Volcano on the Caribbean island of Montserrat emitted volcanic ash and steam in early October 2006. Volcanic emissions continued throughout October and into November.