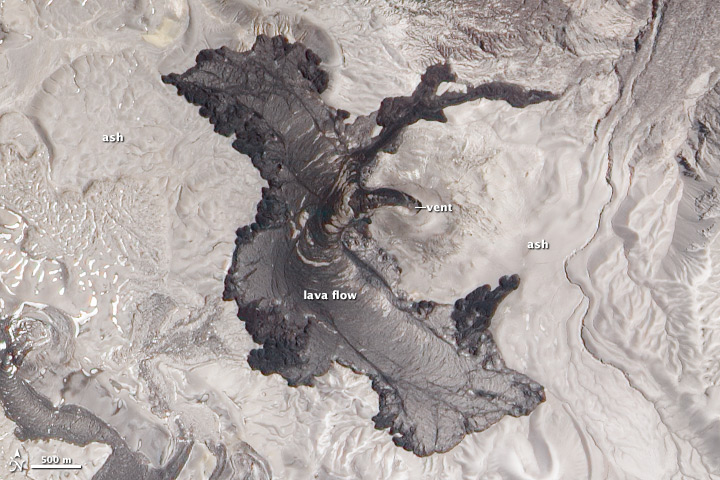 Obsidian—sharp-edged, translucent, and lustrous—is one of the most distinctive volcanic rocks. Its unique glassy properties result from a disordered structure: the atoms are irregular, like a liquid. Whereas crystalline materials like ice, diamonds, or granite have atoms arranged in repeating patterns, obsidian and other types of glass retain an irregular pattern because the atoms are frozen in place as the material solidifies. This can happen if a liquid is cooled very quickly (quenched in water, for example), or if it is so thick that the atoms have trouble moving through the fluid. Therefore extremely viscous, slow-moving lavas sometimes harden into obsidian.

From June 2011 until April 2012, Puyehue Cordón Caulle, a Chilean volcano, erupted a massive obsidian lava flow. The flow covered roughly 16 square kilometers (6.2 square miles) of land in lava about 30 meters (100 feet) thick. This natural-color satellite image shows the flow on January 13, 2013. It was collected by the Advanced Land Imager (ALI) on Earth Observing-1 (EO-1). The dark gray lava stands out against the light gray ash and lava bombs that cover surrounding areas.

A team of geologists visiting Puyehue in January 2013 discovered that the lava was still in motion even though the eruption had stopped. Unlike a crystalline rock, obsidian is not completely rigid: it can flow, even when solid. The higher the temperature, the faster a glass will deform, especially near its melting point. Volcanologist Hugh Tuffen described his experience approaching the flow: “The sound of advancing obsidian lava is quite fascinating and unlike anything I have ever heard—a succession of platey fracturing sounds, as if a bowl of rice crispies were made up of thousands of fragile plates that each broke, rather than the usual snap, crackle and pop.” The hot interior of the lava flow, insulated by a shell of solidified rock, allowed it to continue to ooze downhill.

More than 200 years after the science of geology was born, the Earth is still full of surprises. 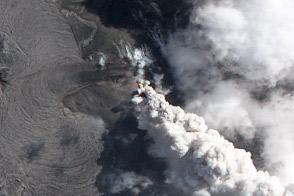 Satellite data suggests that fresh lava continues to be emitted at the Puyehue Corón-Caulle Volcanic Complex.