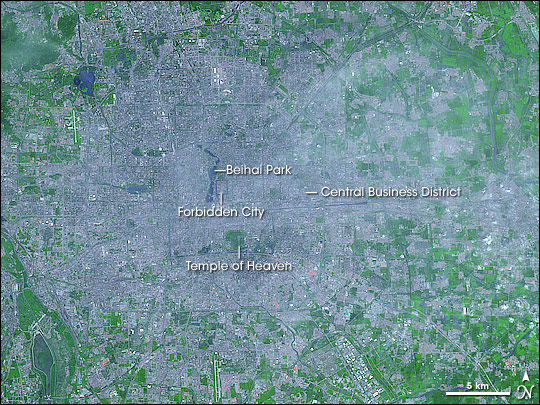 The sprawling, cement-colored cityscape of Beijing is visible in this image from the Advanced Spaceborne Thermal Emission and Reflection Radiometer (ASTER) on NASA’s Terra satellite captured on August 8, 2007. Buildings and paved surfaces range in color from white to charcoal, with blue-gray predominating. Vegetation appears green, and water appears dark blue.

Extensive patches of blue-gray testify to the extent of urbanization in this ancient city. Historically, Beijing has consisted of cities within a city. The ancient heart of the capital is the moat-lined Forbidden City, which was surrounded by the square walls of the “Inner City,” which was in turn surrounded by the larger, rectangular “Outer City.” walls. The walls no longer stand, but they have been replaced by canals and roads, and so their impressions are still visible in the image. The location of the walls of the Outer City is prominent south of the Temple of Heaven park.

Landsat images reveal that, in 1976 and 1984, the urbanized area of Beijing was beginning to spill outside the boundaries of the Outer City. According to the U.S. Geological Survey EarthShots Web site, after a burst of development in the 1950s, China’s government built little additional housing in the city for the next two decades. Migration to Beijing continued, however, creating cramped conditions by the late 1970s. Reforms begun in 1979 caused rapid growth well into the twenty-first century.

Beijing contains multiple, concentric beltways or “ring roads” expanding from the city’s center. The first such road, now obliterated, resulted from Beijing’s tram lines in the 1920s. Newer roads were added beginning in the 1980s. As newer ring roads were built, urbanization kept pace, filling the area inside each new road with buildings and paved surfaces. As the city grew, agricultural and natural areas were consumed. In this scene, only a few pockets of green vegetation (gardens and parks) dot the densely developed heart of the city. Agricultural land has been pushed back to the margins of the image.

Although many cities in the United States concentrate their skyscrapers near the center of town with lower-profile buildings on the outskirts, Beijing’s skyline is nearly the opposite. Low-lying historic buildings occupy the city center with taller buildings, such as skyscrapers in the Central Business District, lying farther from the city’s center.

While features such as airports and historic sites appear fairly clearly, a faint haze hangs over much of the city. The haze is especially thick northeast of the Forbidden City. Although fairly inconspicuous in this image, the haze was a persistent problem for Beijing just one year before its hosting of the 2008 Summer Olympic Games.

You can download a 15-meter-resolution KMZ file of Beijing suitable for use with Google Earth.