How Widespread was the Australian Heatwave? 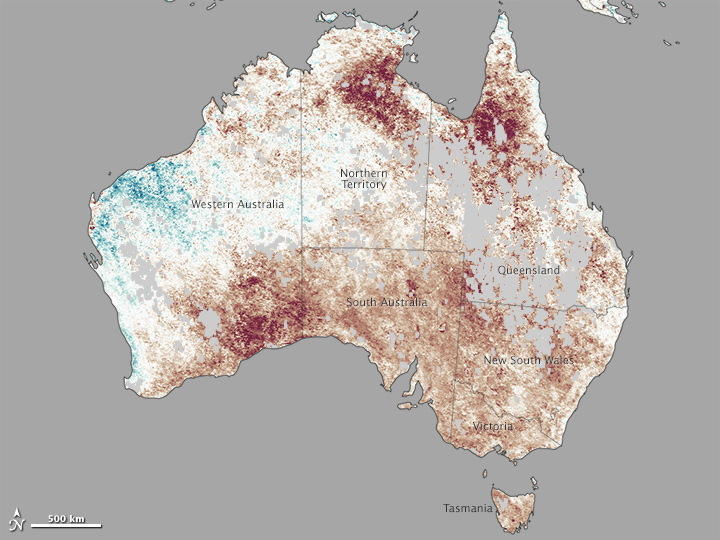 January 2013 brought record-setting heat to Australia; not just for days, but for weeks. Temperatures regularly eclipsed 45 degrees Celsius (113 degrees Fahrenheit) in multiple locations across the continent. According to the Australian Bureau of Meteorology, Australia set a new record for the highest temperature averaged across the entire nation: 40.33°C (104.59°F) on January 7. The national average reached 40.11°C (104.20°F) the following day. The overnight minimum temperature for January 7–8 also set new a record—32.36°C (90.25°F)—contributing to the hottest two-day period in Australia’s recorded history.

Each of the first eight days of 2013 were among the 20 hottest days on record. The scorching weather continued a trend of four consecutive months (September to December 2012) where temperatures were the highest on record. The persistent heat mirrors a similar pattern that developed in the continental United States in 2012.

The map above shows land surface temperature (LST) anomalies for Australia from January 1–8, 2013. LST anomalies are not absolute temperatures; instead, they show how much temperatures were above or below the average. The darkest reds show areas that were as much as 15°C (27°F) above the norm; blues show areas that were below normal; and grays depicts areas with incomplete data (often due to cloud cover). The map was built from data collected by the Moderate Resolution Imaging Spectroradiometer (MODIS) on NASA’s Aqua satellite, and the 2013 data is compared to the average for the same week as observed from 2005–2012.

Observed by satellites uniformly across the entire globe, land surface temperatures are a measure of the amount of infrared energy (thermal radiance) emitted by Earth’s surface as it is heated by daylight and cooled in the dark of night. LSTs are sometimes referred to as land “skin” temperatures, and indeed they are a reflection of how hot a surface would feel to the touch. (To learn more about LSTs and air temperatures, read: Where is the Hottest Place on Earth?)

Five scientists from the Australian Bureau of Meteorology wrote an analysis of the heatwave for The Conversation:

“Australia has always experienced heat waves, and they are a normal part of most summers. However, the current event affecting much of inland Australia has definitely not been typical. The most significant thing about the recent heat has been its coverage across the continent, and its persistence. It is very unusual to have such widespread extreme temperatures—and have them persist for so long. On those two metrics alone, spatial extent and duration, the last two weeks surpasses the only previous analogue in the historical record (since 1910)—a two-week country-wide hot spell during the summer of 1972-1973.”

During a January 2013 meeting of the Intergovernmental Panel on Climate Change (IPCC) in Hobart, Tasmania, IPCC chairman Rajendra Pachauri noted that the heatwave fit the patterns of global warming: “If you look at the trend then I think that's pretty unmistakeable,” Pachauri said, “and any proper analysis would tell you that we are heading in that direction.” 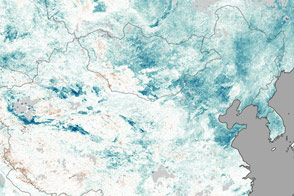