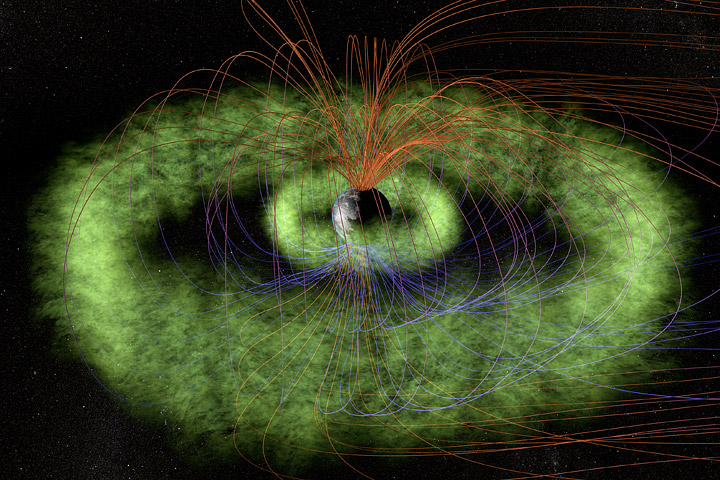 They were the subject of perhaps the first scientific discovery of the Space Age, and yet we still don't know much about them. The radiation belts that surround Earth are home to killer electrons, plasma waves, and intense electrical currents that can disrupt and destroy the electronics on satellites. But the behavior of the Van Allen Belts—named for James Van Allen, who led the team that discovered them in 1958—is wildly unpredictable.

This artist's conception shows the radiation belts (green), which are two doughnut-shaped (torus) regions full of high-energy particles that fill the near-space around Earth. The blue and red lines between and around the belts depict the north and south polarity of the planet’s magnetic field. The inner belt, a blend of protons and electrons, can reach down as low as 1,000 kilometers (600 miles) in altitude. The outer belt, comprised mainly of energetic electrons, can swell to as much as 60,000 kilometers (37,000 miles) above Earth’s surface. Both rings extend to roughly 65 degrees north and south latitude.

The radiation belts were discovered during the flight of the very first American satellite. Van Allen and colleagues had installed a Geiger-Müller tube on Explorer 1 to detect cosmic rays, and as the satellite made its eccentric orbit around the Earth, the readings periodically went off the top of the counter’s scale. It happened again during the flight of Explorer 3 several months later. Several followup missions proved that the space around Earth was not empty, but instead enriched with electrons, protons, and energy created by interactions between Earth's magnetic field (or magnetosphere), the solar wind, and (occasionally) cosmic rays arriving from beyond the solar system.

Fifty-four years later, NASA has embarked on a missions designed specifically to understand the space weather in the dynamic and erratic Van Allen Belts. At 4:05 a.m. Eastern Daylight Time on August 30, 2012, the Radiation Belt Storm Probes (RBSP) were launched into orbit on a United Launch Alliance Atlas V rocket that lifted off from Cape Canaveral Air Force Station in Florida. (Watch video of the launch here.) The Johns Hopkins University Applied Physics Laboratory (APL) built and will operate the twin RBSP spacecraft for NASA’s Living With a Star program.

The identical twin spacecraft will fly in separate orbits across the inner and outer Van Allen radiation belts. The mission is starting near the height of the Sun’s 11-year cycle, or solar maximum. Activity on the sun influences the behavior of the radiation belts, though scientists are puzzled by that behavior. Sometimes a solar storm can swell the belts with particles and energy, creating havoc for Earth-orbiting satellites by accelerating electrons (aka, “killer electrons”) and creating electrical currents. Other times, the radiation belts grow very calm and depleted during Sun storms. Occasionally, no change is detected at all.

The RBSP satellites are designed to observe how and when killer electrons are energized, to sample the electrical and magnetic fields in Earth’s space, to count particles, and detect plasma waves of different frequencies. The ultimate goal is to improve the prediction of space weather; that is, how solar activity can cause geomagnetic storms that upset telecommunications and electronics. 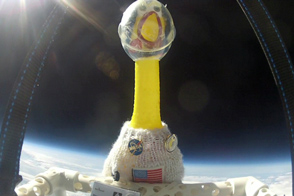