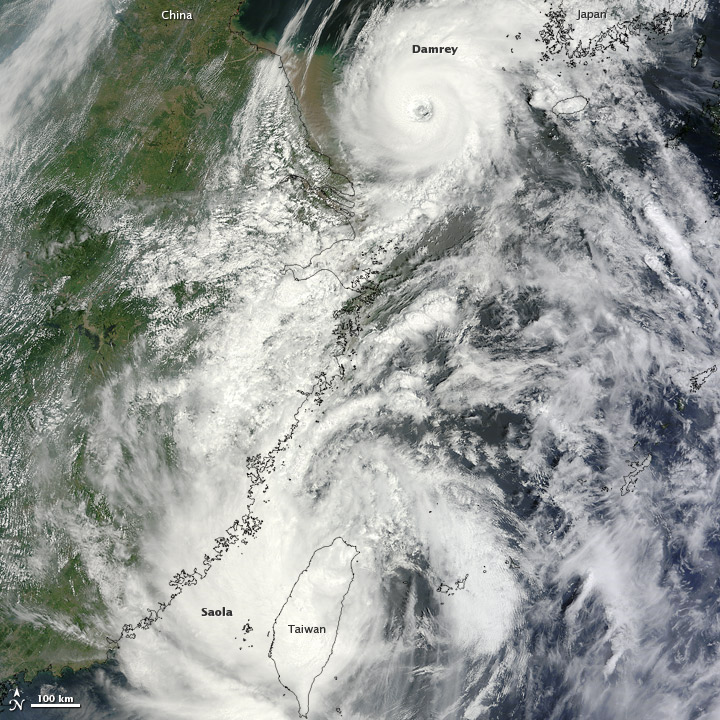 Two severe storms, Damrey and Saola, made landfall in southeastern China within hours of each other on August 3, 2012. The first storm to arrive, Damrey, came ashore in Jiangsu Province. Saola made landfall in Fujian Province. The storms could ultimately affect coastal areas in 10 provinces, Xinhua News Agency warned.

The Moderate Resolution Imaging Spectroradiometer (MODIS) on NASA’s Terra satellite captured this natural-color image of the storms as they approached the China coast on August 2, 2012.

As the storms approached the coast, Chinese authorities urged local governments to watch the storms closely and warn residents of danger as quickly as possible, China Daily reported on August 2. Located between the projected storm tracks, Shanghai made emergency preparations for the coming storms, and tens of thousands of fishing boats were ordered to return to port.

By the time it made landfall in southeastern China, Saola had already caused widespread damage in the Philippines and Taiwan. News reports placed the combined death toll at more than 40. In China, Damrey and Saola downed power lines, forced the cancellation of dozens of flights, and prompted the evacuation of hundreds of thousands of residents.