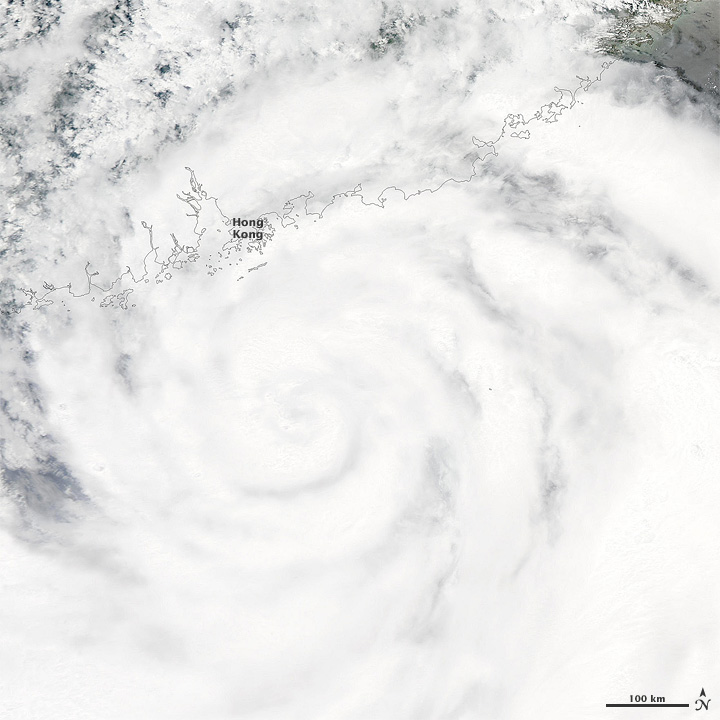 Vicente formed as a tropical depression over the western Pacific Ocean on July 20, 2012, and strengthened to a tropical storm the following day, Unisys Weather reported. On July 23, Vicente strengthened to a typhoon. The same day, the U.S. Navy’s Joint Typhoon Warning Center (JTWC) reported that Vicente was located roughly 75 nautical miles (140 kilometers) south of Hong Kong. The storm had maximum sustained winds of 120 knots (220 kilometers per hour) with gusts up to 145 knots (270 kilometers per hour).

The Moderate Resolution Imaging Spectroradiometer (MODIS) on NASA’s Aqua satellite captured this natural-color image of Vicente on July 23, 2012, as the storm clouds extended over Hong Kong and the surrounding region.

As of July 23, the JTWC storm track forecast showed Vicente moving primarily westward across southeastern China and northern Vietnam over the next few days.

By the time Vicente approached the China coast, it had already caused substantial damage in the Philippines. Known there as Ferdie, the storm was blamed for two deaths, several people missing, impassable roads, and evacuations.