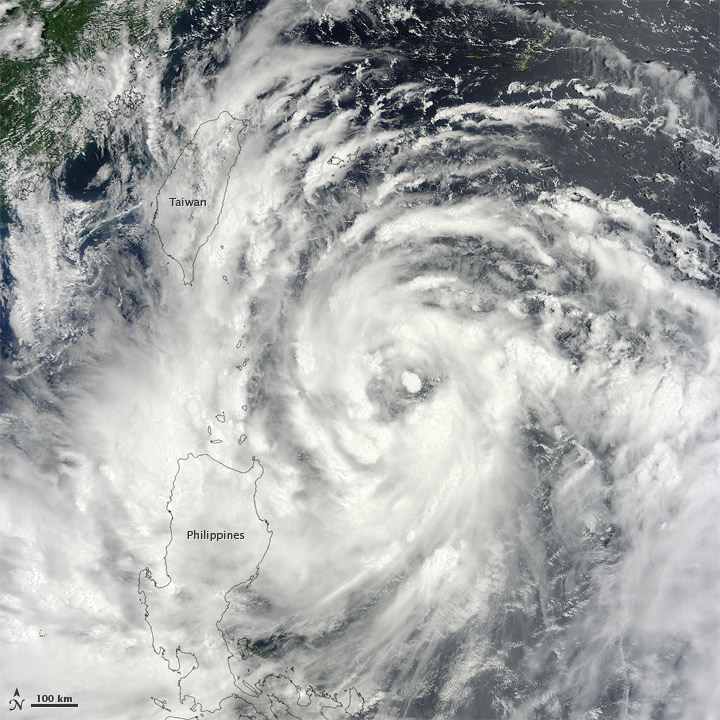 Saola formed as a tropical depression over the western Pacific Ocean on July 28, 2012, and strengthened to a tropical storm the same day, Unisys Weather reported. By July 30, Saola was a typhoon, and the U.S. Navy’s Joint Typhoon Warning Center (JTWC) reported that the storm had maximum sustained winds of 65 knots (120 kilometers per hour) with gusts up to 80 knots (150 kilometers per hour).

The JTWC forecast that, within 48 hours, Saola would pack sustained winds of 105 knots and gusts up to 130 knots (equivalent of 195 and 240 kilometers per hour). The projected storm track showed Saola moving toward the northwest, past the island of Taiwan and toward southeastern China.

The Moderate Resolution Imaging Spectroradiometer (MODIS) on NASA’s Terra satellite captured this natural-color image of Typhoon Saola on July 30, 2012. The center of the storm was located southeast of Taiwan and east-northeast of the northern Philippine Islands.

Saloa had already caused damage in the Philippines by July 30, news reports said, including flooding and widespread power losses.