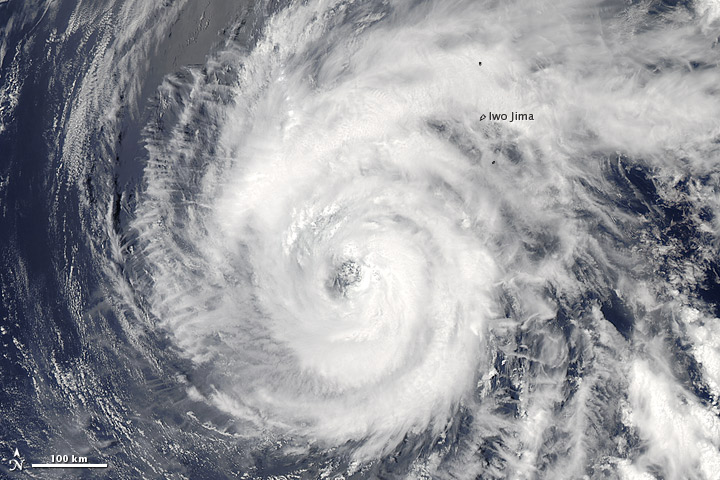 Sanvu first formed as a tropical depression over the western Pacific Ocean on May 21, 2012, strengthened to a tropical storm the same day, and became a typhoon two days later. On May 25, 2012, the U.S. Navy’s Joint Typhoon Warning Center (JTWC) reported that Sanvu was located roughly 100 nautical miles (185 kilometers) southwest of Iwo Jima (Iwo To), Japan. The storm had maximum sustained winds of 80 knots (150 kilometers per hour) and gusts up to 100 knots (185 kilometers per hour).

The Moderate Resolution Imaging Spectroradiometer (MODIS) on NASA’s Aqua satellite acquired this natural-color image of Typhoon Sanvu on May 25. The typhoon’s spiral arms extended over Iwo Jima and nearby islands.

As of May 25, the JTWC’s projected storm track for Sanvu showed the storm moving toward the northeast, over the open Pacific Ocean. Wind speeds were expected to gradually decrease over the next couple days. 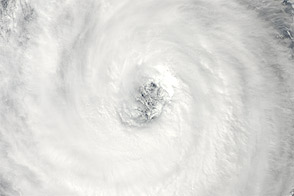 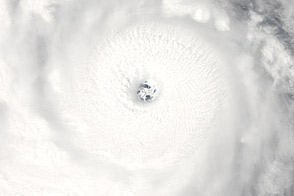 Acquired September 13, 2012, this natural-color image shows he storm just east of the Philippines.