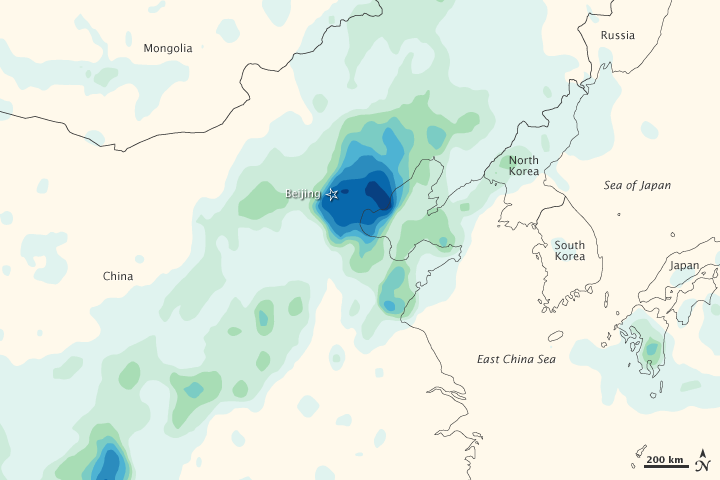 The heaviest rainfall in 61 years fell on the Chinese capital city of Beijing on July 21, 2012. Heavy rain started in the afternoon and continued through the evening, TIME reported. The state news agency Xinhua reported that rainfall over Beijing averaged 170 millimeters (almost 7 inches), and reached 460 millimeters (18 inches) in the city’s Fangshan District.

Because this image is an estimate of the rainfall recorded over a very large area when the satellites are overhead, it may miss pockets of heavy rain in smaller areas, or short periods of more or less intense rain. As a result, local rainfall totals measured from the ground may differ from the estimate shown here.

As of July 23, the Beijing flood death toll stood and 37, Xinhua reported. Deaths resulted from drownings, collapsed buildings, lightning, and electrocutions from downed power lines, news reports said. In mountainous areas outside the city, more than 30,000 residents had to evacuate in case of landslides.

This color-coded map estimates precipitation around Beijing on July 21–22, 2012, when the heaviest rain in six decades fell on the city.