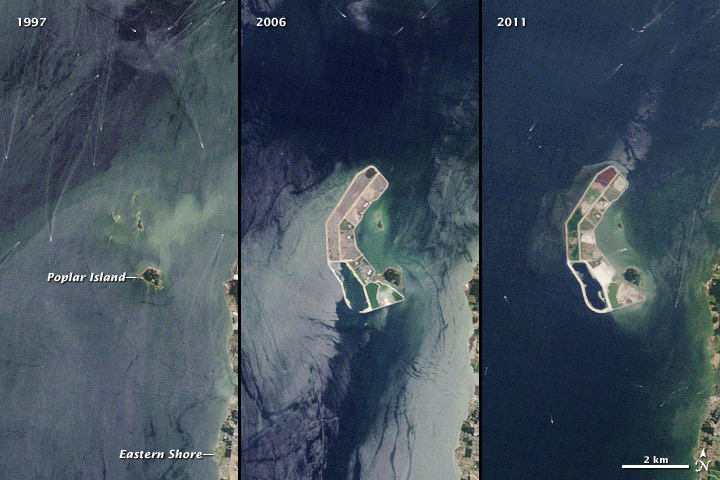 Not so long ago, many islands rose above the brackish waters of the Chesapeake Bay. These small islands offered a predator-free haven for nesting water birds and turtles, while the larger islands supported fishing communities along with wildlife. But now, the muddy, marshy islands are eroding under the combined forces of geology and climate change. The very crust under the Chesapeake Bay is sinking, while sea levels are rising. Made of clay and silt, the islands erode quickly, and many have disappeared altogether.

Poplar Island ranks among those that would have been gone a decade ago if not for a massive restoration project. In the 1800s, the island had an area just over 1,000 acres and held a small town of about 100 people. By the 1990s, the island was nearly gone, containing a mere 10 acres of land. In the left image, taken by the Landsat 5 satellite on June 28, 1997, Poplar Island had been reduced to a tiny green dot surrounded by clouds of silt-laden water.

In 1998, the U.S. Army Corp of Engineers began to restore Poplar Island. The project serves two purposes: it restores lost habitat to birds and turtles, and it provides a use for material dredged from Baltimore Harbor and Chesapeake Bay shipping lanes. The method of restoration is visible in the center image, taken on June 21, 2006. Engineers built dikes around sections of the island and have been gradually filling in the center with dredged silt. By 2006, the island had regained the shape it held in the 1800s.

As each cell is filled with new soil, the Army Corp of Engineers plants vegetation. The right image, taken on July 5, 2011, shows that much of the island has been re-vegetated. Poplar Island now has an area of 1,140 acres and may continue to expand by another 500 acres before the restoration is completed in 2027. Upon completion, Poplar Island will be half wetlands and half uplands covered by forest. The restoration project is expected to cost $667 million, says the U.S. Army Corp of Engineers.

Islands and shorelines in the Mid-Atlantic may become increasingly vulnerable to erosion. Sea levels are rising as the ocean warms and expands—and as glaciers and ice sheets melt—but the rise isn't uniform around the planet. Currents, salinity, and topography create areas where sea levels are increasing more quickly, and recent research found that the U.S. Mid-Atlantic coast is one of the areas of accelerated sea-level rise. The rate of increase in the densely populated Mid-Atlantic is three to four times greater than average global sea-level rise. The increased sea level will make coastal regions and islands more prone to flooding and erosion.

A short animation of the Poplar Island restoration is available from the NASA Scientific Visualization Studio. 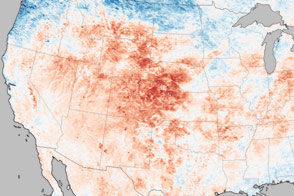