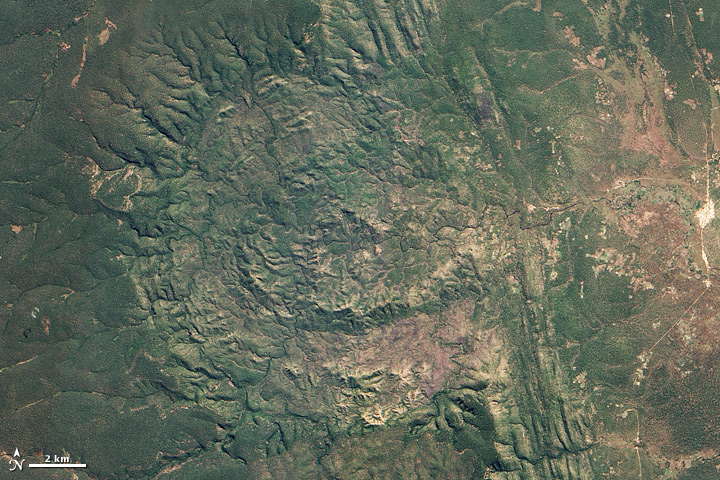 Impact craters can be tough to detect from the ground, especially if they are situated in remote locations and covered by vegetation. Both factors hampered understanding of the Luizi Structure, located in southeastern Congo. The crater is covered by grasses up to a meter (3 feet) high, and tucked away in central Africa.

The Advanced Land Imager (ALI) on NASA’s Earth Observing-1 (EO-1) satellite captured this natural-color image of Luizi on June 2, 2012. It is not perfectly round, but instead fills a semicircular basin where vegetation carpets the complicated topography.

A mention of Luizi made it into a geological report in 1919, but the feature remained unexplored for decades. Satellite imagery of the structure from the 1990s inspired an international team of geologists to look more closely. In 2011, they announced their findings.

Satellite imagery suggested that Luizi might be an impact crater, but volcanoes and even salt domes can form structures that look like impact craters, so the researchers had to go into the field. They found shatter cones, and microscopic analysis of rock samples collected from the site revealed shocked quartz grains. Both shatter cones and shocked quartz are considered strong evidence of meteorite impacts.

Impact craters can be simple or complex. While simple craters have uncomplicated bowl shapes, complex craters sport features that can be counterintuitive, such as inner rings and central peaks. Geologists have linked both crater types to the action of high-velocity impacts.

The researchers studying Luizi reported that the crater spans about 17 kilometers (11 miles) in diameter, with an intermittent ring about 5.2 kilometers (3.2 miles) across, and a smaller, center ring about 2 kilometers (1.2 miles) across. Around the perimeter of the crater, a rim rises approximately 300 to 350 meters (980 to 1,150 feet) above the interior. In short, Luizi is a well-preserved, moderately sized, complex crater.

Exactly when Luizi formed is hard to answer. The researchers estimate that nearby rocks are 575 million years old—more than 300 million years older than the first dinosaurs. But besides knowing that the impact can’t be older than the rock layers it disrupted, the geologists can’t yet say when the impact occurred. Whenever the meteorite arrived, it may have been moving as fast as 72,000 kilometers (45,000 miles) per hour.