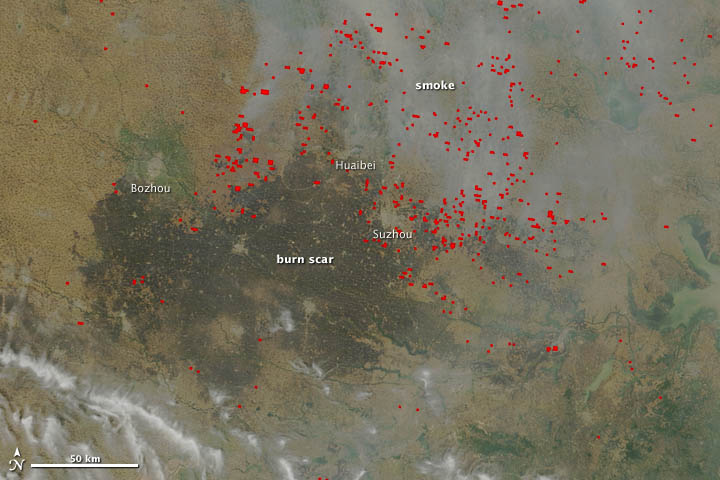 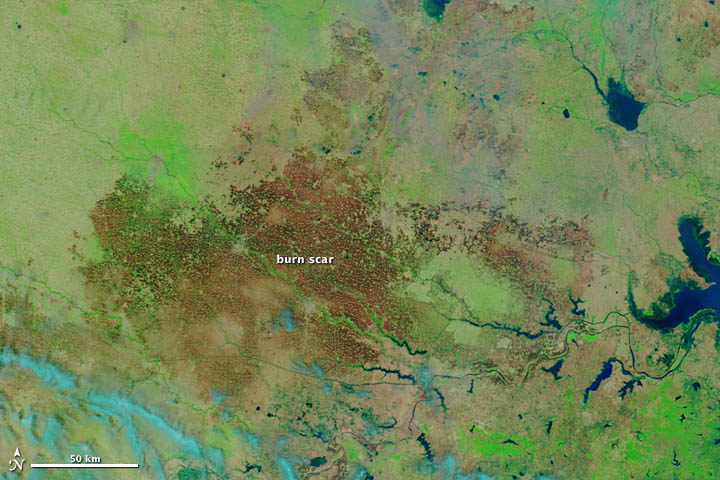 In mid-June, agricultural fires and industrial pollution combined to leave a thick pall of haze over central China. The Moderate Resolution Imaging Spectroradiometer (MODIS) on NASA’s Terra satellite captured these true-color (top) and false-color (bottom) images of the fires and haze. Both images were acquired at 10:55 a.m. local time (02:55 UTC) on June 13, 2012.

Smoke and actively burning fires (shown with red outlines) are visible in the true-color image, as well as a large burn scar. The false-color image reveals details of the burn scar that aren’t readily apparent in the true-color view. Although the burn scar looks uniform, the false-color view indicates that numerous fields with unburned vegetation (shown as green) are scattered throughout the area. The cities of Bozhou, Huaibei, and Suzhou, which appear as gray patches, were the closest cities to actively-burning fires when Terra acquired the images.

This area falls within the North China Plain, a fertile and densely-populated region that’s home to about a quarter of China's cultivated land and 35 percent of the country's agricultural yields. The area’s staple crops are wheat and maize, and the two crops are generally grown in rotation. Farmers sow winter wheat in mid-October and harvest it at the end of May. In June, farmers burn the remaining plant residue to fertilize the soil for the upcoming maize crop. About 75 percent of all fires in the North China Plain occur in June. A second peak in fire activity occurs in October after the maize harvest.

Smoke from agricultural burning contains a number of substances that pose a hazard to human health, notably black carbon and organic carbon. Fires also emit carbon monoxide and nitrogen oxides (NOx), volatile precursor gases that react to form ground-level ozone. The World Bank estimated in 2007 that about 350,00 to 400,000 people die prematurely each year in China because of outdoor air pollution.

Since the 1990s, the number of agricultural fires in the country has decreased because the government began enacting a series of regulations aimed at prohibiting field burning. However, the practice remains common.

Fires and Haze in Eastern China