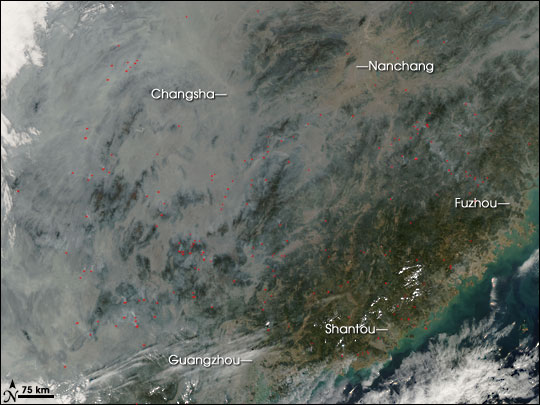 Dozens of fires were burning in southern China on January 6, 2008, when the Moderate Resolution Imaging Spectroradiometer (MODIS) on NASA’s Aqua satellite passed overhead and captured this image. Places where the sensor detected actively burning fires are marked with red dots. These fires are probably agricultural, not wildfires.

The thick haze that mutes the rugged topography of the region is probably only partly caused by smoke from these fires. Industrial and urban pollution is a major health and environmental problem for eastern China, from southern cities such as Guangzhou to more northerly cities, such as Beijing.

The large image provided above has a spatial resolution (level of detail) of 250 meters per pixel. The MODIS Rapid Response Team provides daily images of sub-regions of eastern China in additional resolutions via a clickable map.