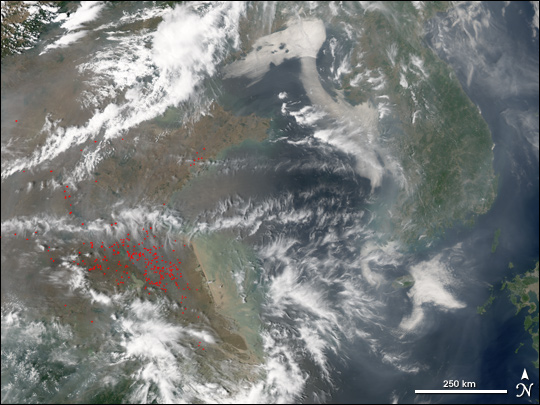 In eastern China in mid-June 2005, fires were burning in the northern part of Jiangsu province on the coast of the Yellow Sea. In this image from the Moderate Resolution Imaging Spectroradiometer (MODIS) on NASA’s Aqua satellite, red dots mark the location of actively burning fires that MODIS detected. The fires had been burning for several days before this image was collected on June 13, and the smoke was filling the skies over the Yellow Sea, the Korean Peninsula (top right), and approaching Japan (right edge).

Jiangsu is an agricultural powerhouse in China, with large areas being cultivated much of the year. The widespread nature of the fires, their location, and the time of year suggest that these fires are being set intentionally for agricultural purposes. Although the fires are not necessarily immediately hazardous, such widespread burning can have a strong impact on weather, climate, human health, and natural resources.