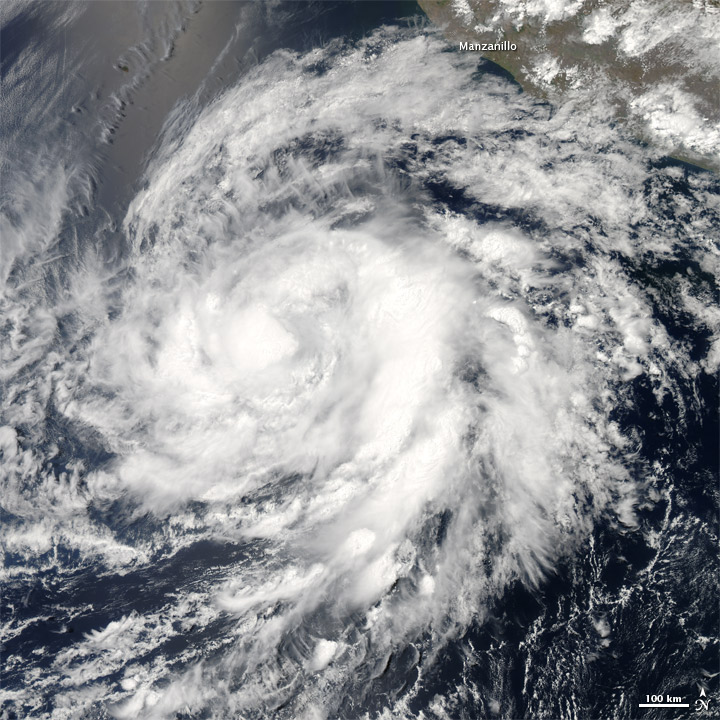 On May 20, 2012, a tropical depression formed over the eastern Pacific Ocean, about 525 miles (845 kilometers) south of Acapulco, Mexico. The depression strengthened into a tropical storm on May 22, and became a hurricane on May 23. At 5:00 a.m. Pacific Daylight Time (PDT) on May 24, 2012, the U.S. National Hurricane Center (NHC) reported that Hurricane Bud was located roughly 315 miles (510 kilometers) south-southwest of Manzanillo, Mexico.

The Moderate Resolution Imaging Spectroradiometer (MODIS) on NASA’s Aqua satellite captured this natural-color image around 1:30 p.m. PDT on May 23, several hours before Tropical Storm Bud strengthened into a hurricane.

As of 5:00 a.m. PDT on May 24, the NHC reported, Bud had maximum sustained winds of 90 miles (150 kilometers) per hour, and was moving slowly toward the north-northeast. Bud was expected to approach the southwestern coast of Mexico late in the day on May 25. A hurricane watch was in effect for the coast of Mexico from Punto San Telmo to Cabo Corrientes.

Acquired May 23, 2012, this natural-color image shows Tropical Storm Bud off of coast of southwestern Mexico.

Bud formed as a tropical storm over the eastern Pacific Ocean in late May 2012 and strengthened into a hurricane. 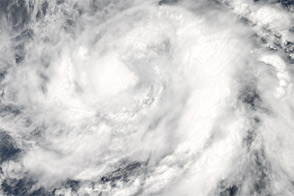