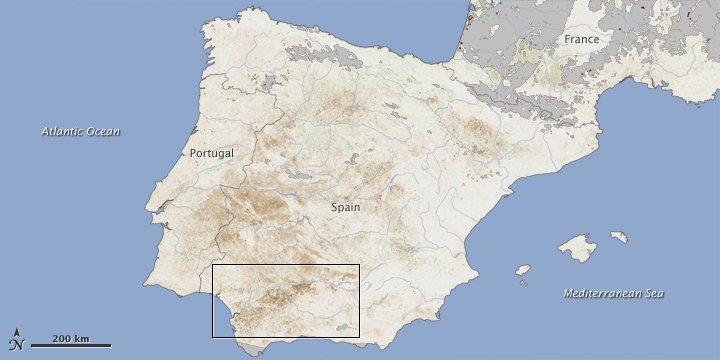 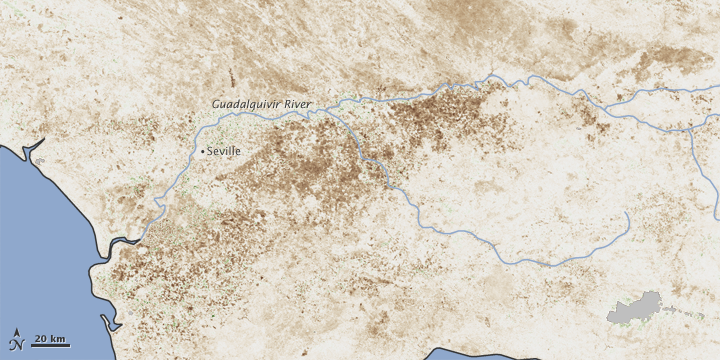 Grain crops in Spain are suffering after an unusually dry autumn and winter. The amount of rainfall has been just half of normal in key grain producing regions.

The top image shows the impact of the drought on plants throughout the country. The map was made with Normalized Vegetation Difference Index (NDVI) data from the Moderate Resolution Imaging Spectroradiometer (MODIS) instrument on the Terra satellite. It compares plant growth between April 6 and April 21, 2012, with average conditions for the same period. Brown indicates areas where plants are growing less vigorously than usual for this time of year. Gray indicates areas where data were not available.

The lower image shows a closer view of Andalucía, a region in southern Spain that produces almost all of the country’s durum wheat. Only about half the normal amount of rainfall fell in Andalucía between January and April. In the other key wheat producing states of Castilla y Leon, Castilla-La Mancha, and Aragón, rainfall has been low as well.

In an analysis released on May 10, 2012, the USDA Foreign Agricultural Service, projected Spain’s wheat production would drop by 20 percent, oats by 18 percent, and barley by 14 percent in comparison to last year. Overall, the USDA expects Spain will need to import 11 million metric tons of grain from other European countries because of the drought.

In late April, increasing rainfall has started to improve the situation, particularly in the northern half of the country. If rain continues to fall regularly throughout May, there’s a chance that barley and wheat yields could rebound.

Spain is not the only European country grappling with a weak wheat crop. Ukraine, Romania, Bulgaria, and other countries will likely see reduced yields as well due to dry weather. A cold spell at the end of February in Poland and Germany has also harmed crops.

Wheat production is poised to drop 20 percent after a dry winter.