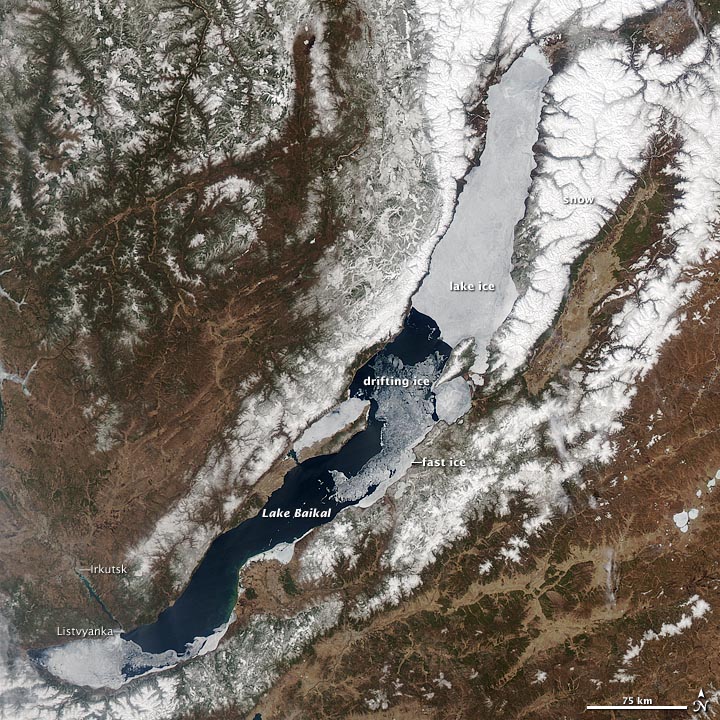 For several months each year, Russia’s Lake Baikal is covered by a thick layer of ice. Formation begins in late December, and by mid-January the entire lake is usually blanketed. Come spring, the lake begins its long, slow melt. Patches of open water usually appear in the southern part in early May and move progressively northward. But it isn't usually until late June that the last remnants of ice have disappeared from the northern reaches of the lake.

The image above, captured on May 4, 2012, by the Moderate Resolution Imaging Spectroradiometer (MODIS) instrument on NASA’s Aqua satellite, shows ice breaking up in the central part of the lake. Ice remains throughout the northern portion, but drifting ice and large patches of open water are visible throughout the southern part. (Ice often lasts longer in the extreme southeastern part of Lake Baikal because that area is shallow.)

The image also shows fast ice along the coasts. Fast ice is anchored, or fastened, to the shore and does not move with the winds or currents. It usually persists longer than ice that forms over deeper water.

People living along the lake have long kept track of the freezing and break-up. One of the best records comes from a monitoring station at Listvyanka, a village on the southeastern coast of the lake that’s about 70 kilometers (40 miles) southeast of Irkutsk. The Listvyanka station has kept uninterrupted records of ice formation and melting that date back to 1869.

Measurements from Listvyanka reveal some interesting trends related to the timing of ice break-up; most notably that it is occurring earlier now than in the past. In the 1870s, thawing began around May 10; today, it often begins in late April. One study by a Swiss researcher calculated that the thawing date had moved by half a day per decade between 1869 and 1999. However, the most rapid change (about 3 days earlier per decade) occurred between 1869 and 1920. Since 1920, the date of ice breakup has remained fairly constant at Listvynaka. Ice formation, however, has occurred later in the winter, so the overall ice cover doesn't last as long as it once did.

But what happens at Listvyanka doesn't necessarily apply to the rest of Lake Baikal, so researchers have turned to satellites for a broader view. A team led by Alexei Kouraev, a scientist based in St. Petersburg, has mined the data collected by altimeters on six different satellites (including NASA's Jason-1 satellite and Europe’s EnviSat satellite) to produce records of thawing between 1992 and 2004.

The study has shown that over the central and northern part of the lake, ice has been forming later, breaking up later, and lasting longer overall since 1992. (For the southern part of Lake Baikal, the satellites show the timing of the breakup has been fairly constant, but that ice is forming later in the winter, which is consistent with the Listvyanka record.

The reasons for the change are still to be sorted out. Air temperatures have a leading role in how long ice lasts, and recent decades have seen Siberian winters grow colder due to the behavior of the Arctic Oscillation. Kouraev's team also lists a number of other factors that can affect how long Baikal’s ice lasts, including wind patterns, lake currents, clouds, snowfall amount, and the volume of river water discharged into the lake. 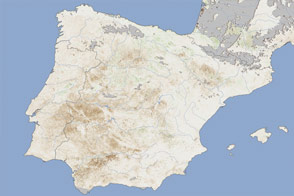