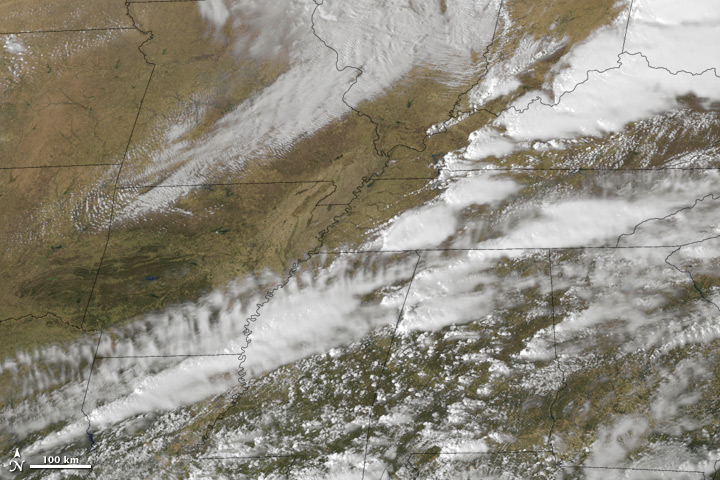 Severe thunderstorms and tornadoes swept across the U.S. Midwest and Appalachians on March 2, 2012. According to CNN, at least 36 people were killed, with the majority of victims in Indiana and Kentucky. By March 5, the death toll had risen to 39, Weather Underground reported.

This animation is a combination of thermal infrared (heat) and visible imagery from the Geostationary Operational Environmental Satellite-East (GOES-East), and a color map from the Moderate Resolution Imaging Spectroradiometer (MODIS). The animation begins at 12:01 a.m. Eastern Standard Time (0501 Universal Time) March 2, and continues until 12:01 EST (0501 UTC) March 3.

Tornadoes are hardly unheard of at this time of year, but there have been an unusually high number of tornadoes so far this year, according to the National Oceanic and Atmospheric Administration. NOAA reported that the January 2012 tornado total of 95 was much higher than the 1991–2010 average of 35. As of March 5, the National Weather Service Storm Prediction Center reported 128 tornadoes occurring on March 2. This preliminary figure was subject to change, but it put the March 2–3 outbreak in second place for the greatest two-day total of early-season tornadoes since recordkeeping began in 1950. And because the March 2–3 outbreak followed another set of tornadoes on February 28–29, the five-day total for February 28 to March 3 could rank as the most severe outbreak since recordkeeping began, according to meteorologist Jeff Masters.

On his Weather Underground blog, Masters explained the March 2–3 outbreak as a result of warm, wet air from the Gulf of Mexico mixing with cold, dry air aloft. Warm conditions set or tied daily temperature records at 28 airports in seven states. That warm air near the ground was wedged below much colder air aloft, creating an unstable environment where warm air rose rapidly in thunderstorm updrafts. Fast-moving jet stream winds—changing speed and direction with altitude—supplied the updrafts with spinning motion, leading to tornadoes.

Why has there been such an unusual start to tornado season? Masters speculated: “The tornado database going back to 1950 doesn’t show an increasing trend in strong tornadoes in recent decades...[But] one thing that climate change may be doing, though, is shifting the season earlier in the year.” It is possible that tornado season could start sooner but also end sooner each year. However, an early start to tornado season does not necessarily mean that the rest of the 2012 season will be severe, according to NOAA meteorologist Harold Brooks. 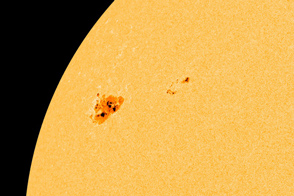 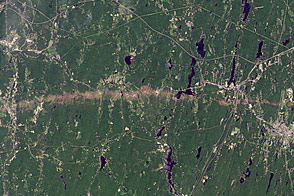