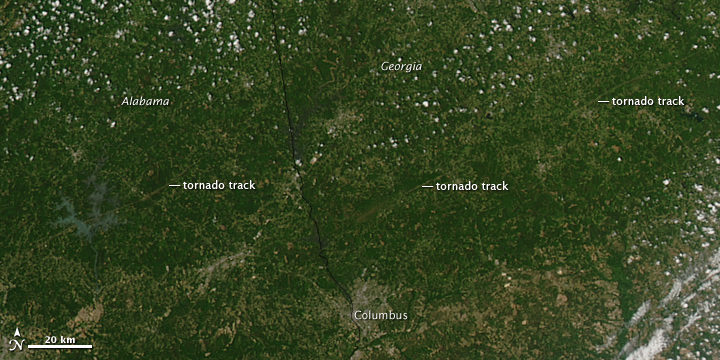 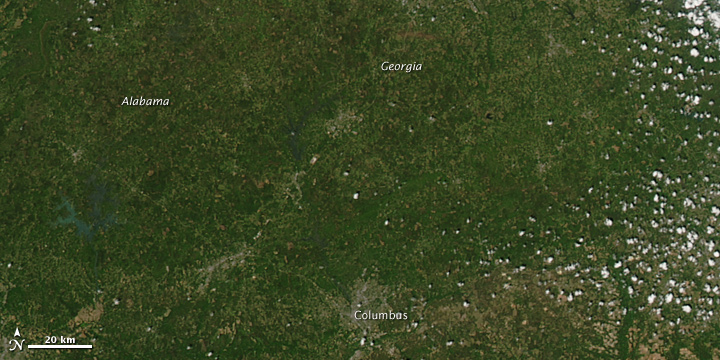 Three tornado tracks stretch across Georgia and Alabama in this true-color image taken by the Moderate Resolution Imaging Spectroradiometer (MODIS) on NASA’s Aqua satellite on April 28, 2011. The lower image, from April 12, confirms that the long brown tracks were not present before the storm.

The westernmost track, in Alabama, crosses over Lake Martin and then extends northeast toward the Georgia border. The tornado caused extensive damage in the community of Dadeville, east of the lake, reported the National Weather Service.

Two tracks are visible in Georgia, and both were caused by EF3 tornadoes with winds up to 140 miles per hour, according to the National Weather Service. The fainter of the two tracks (in the north) passed through Meriwether, Spalding, and Henry counties, covering 20 miles. The tornado was half a mile wide.

The lower track is much longer, covering at least four counties and about 30 miles, according to ground-based reports from the National Weather Service.

The tornadoes came from a series of severe storms that crossed the southern United States on April 27–28, 2011. The storms generated more than 150 tornadoes and killed nearly 300 people across six states.