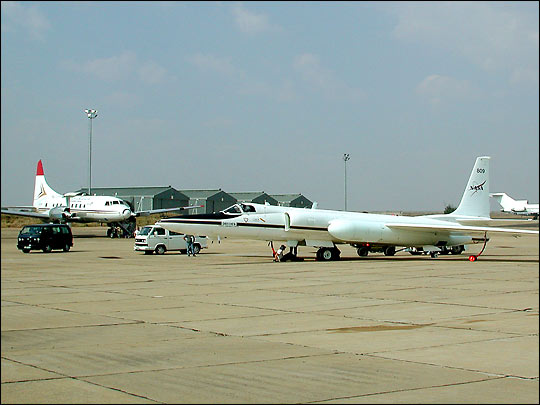 This photograph shows two of the aircraft participating in SAFARI at their temporary home in Pietersburg, South Africa—NASA’s ER-2 (foreground) and the University of Washington’s Convair-580 (left). The ER-2 is a high altitude research aircaraft based on the U2 spyplane with a range of 3,000 miles (4800 km) and a maximum altitude over 65,000 feet (19.8 km). The aircraft carries simulators for the Moderate Resolution Imaging Spectroradiometer (MODIS), Multi-angle Imaging Spectroradiometer (MISR), and Measurements Of Pollution In The Troposphere (MOPITT) instruments aboard Terra. The ER-2 also carries several other instruments to remotely sense and directly measure the atmosphere.

The Convair-580 is a much bigger plane capable of carrying a large number of scientists and instruments. For SAFARI 2000, it will carry an extensive complement of instruments to study aerosols, cloud properties, atmospheric chemistry, and meteorology. After spending six weeks in Pietersburg starting August 12, 2000, it will move to Namibia to study stratus clouds.

To learn more about SAFARI 2000, visit the SAFARI homepage, and read updates from Africa.

A CLAMS-Eye View of Earth