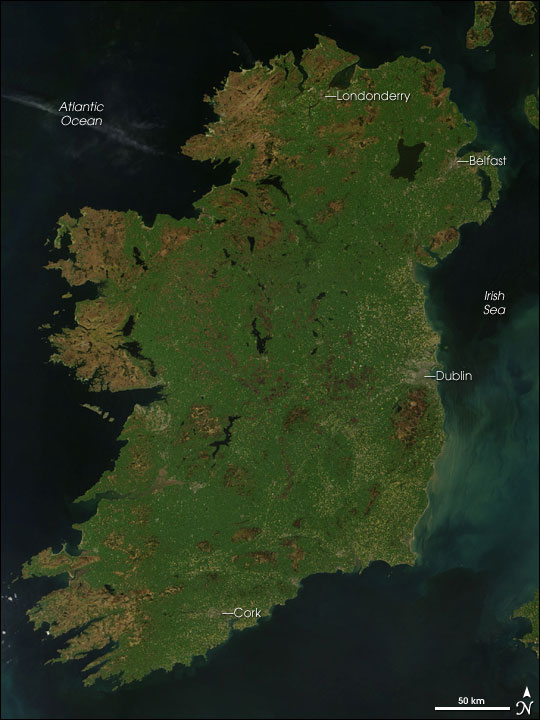 Between 51.5 and 55.5 degrees north latitude, Ireland could easily find itself buried in snow during the winter, but the island’s average temperature in January is 7 degrees Celsius (45 degrees Fahrenheit). Ireland’s mild climate results from the influence of the ocean current known as the North Atlantic Drift, which extends the warm waters of the Gulf Stream northward. The island enjoys mild temperatures in the summertime as well; extreme heat and cold are virtually unknown. Precipitation ranges from 78.5 centimeters (31 inches) around Dublin to 300 centimeters (118 inches) along the west coast.

The mild, rainy climate is good for vegetation. In this image from the Moderate Resolution Imaging Spectroradiometer (MODIS) on NASA’s Terra satellite on May 2, 2007, Ireland overwhelms the viewer with hues of green, particularly in the interior, where the vegetation overlies lowlands of limestone—the remains of marine animals from an ancient sea. Little of the island’s famous greenness results from trees, however. Seventeenth-century clearing removed most of the country’s forests, and despite replanting efforts, Ireland is Europe’s least forested country, after Iceland. The island’s mild temperatures and humidity have instead blanketed the landscape in abundant grasses.

Along Ireland’s west coast, bare brown rocks emerge from the plant cover. In the north, the rocks are primarily ancient, crystalline rocks deposited well over a billion years ago. In the south, the rocks are primarily sandstone deposited roughly 350 million years ago. Evidence of urbanization dots the landscape, especially along the east coast. The metropolitan area of Dublin appears as an uneven patch of gray, mingled with dots of green. Human habitation is also evident around Londonderry, Belfast, and Cork.