Do You See What They See 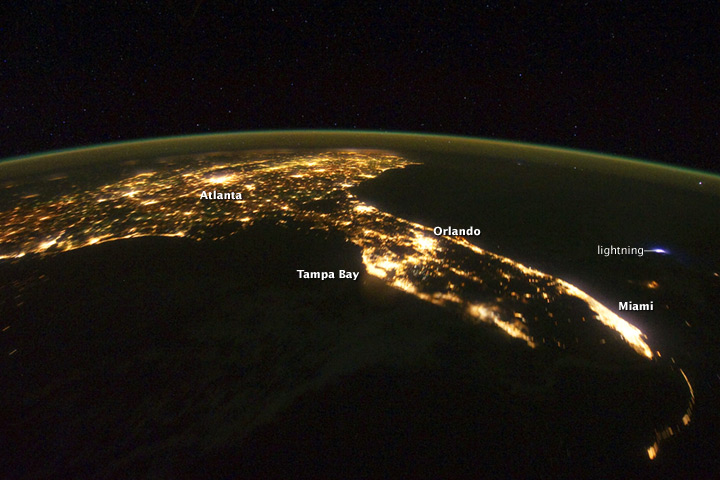 Only two sets of people can fly around the entire world in one night. One is rumored to reside at the North Pole; the others live on the International Space Station (ISS). And for all of them, the night-lit view of the planet is simply extraordinary.

While orbiting over the Gulf of Mexico on November 24, 2011, Expedition 30 astronauts captured this digital photograph of Florida, Georgia, and the Southeastern U.S. coast. The region is very popular with tourists escaping cold northern winters or visiting retired family members who settle in the warmer climate.

The image is part of a time series taken between 07:30 and 07:59 Universal Time (2:30 to 2:59 a.m. U.S. Eastern Time), as the ISS passed from the tropical Pacific Ocean to the Canadian Maritimes. (A link to the movie is just below the image above.) The series starts when the ISS was near the equator; then passes over Mexico, Honduras, Guatemala, and the Yucatan Peninsula; across the Gulf of Mexico (with Cuba on the right); over the Sunshine State; and up the U.S. East Coast over the North Atlantic Ocean. The video ends with ISS just east of Newfoundland. A collection of similar time-lapse ISS flight paths can be viewed by visiting the Crew Earth Observations Videos page.

If you happened to be flying a reindeer-harnessed sleigh through the sky on December 24th and 25th, the view might look pretty similar to what the ISS crew witnessed. You can follow such a holiday flight by visiting the NORAD tracking page, where satellites, fighter jets, and radar stations provide airborne reconnaissance for the jolly sleigh-rider in the red suit—who has special clearance one night per year.

Astronaut photograph ISS030-E-6082 was acquired on November 24, 2011, with a Nikon D3S digital camera using a 19 mm lens, and is provided by the ISS Crew Earth Observations experiment and Image Science & Analysis Laboratory, Johnson Space Center. The image was taken by the Expedition 30 crew. The image has been cropped and enhanced to improve contrast. Lens artifacts have been removed. The International Space Station Program supports the laboratory as part of the ISS National Lab to help astronauts take pictures of Earth that will be of the greatest value to scientists and the public, and to make those images freely available on the Internet. Additional images taken by astronauts and cosmonauts can be viewed at the NASA/JSC Gateway to Astronaut Photography of Earth. Caption by Michael Carlowicz, NASA Earth Observatory.

Astronauts and Santa Claus have a similar view of the planet.