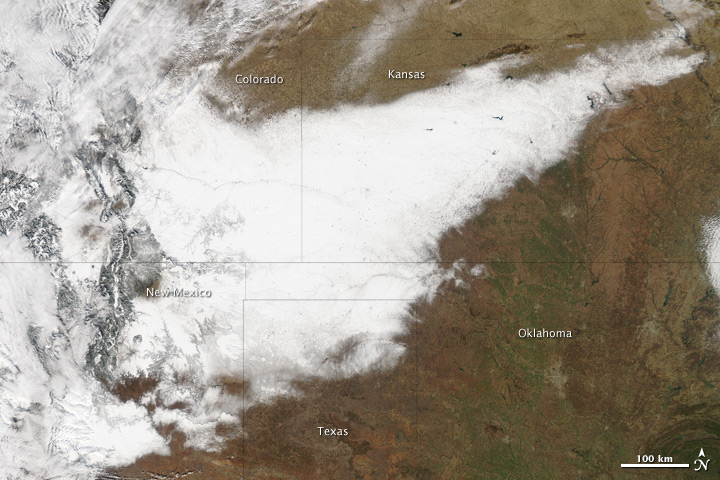 If you are hoping for a white Christmas this year, you may want to head south. A string of winter storms has left New Mexico, Colorado, and parts of the Southern Plains coated in white, while much of the rest of the United States remains snow free. The Moderate Resolution Imaging Spectroradiometer (MODIS) on NASA’s Aqua satellite acquired this image on December 21, after the clouds from the first storm had moved away and before a second storm arrived. A strip of snow extends from New Mexico to Kansas, revealing the track of the storm.

The blizzard hit on December 19 and 20, lashing the American Southwest and Southern Plains with strong winds and snow up to 15 inches (38 centimeters) deep. Drifting snow and poor visibility closed roads throughout the region, including parts of two major interstates, 25 and 70. The storm was responsible for six deaths.

Even as the clouds from the first storm moved off, another moved down the spine of the Rocky Mountains, dropping moderate to heavy snow. In Denver, snow forced more than 100 flights to be cancelled in the middle of the busy holiday travel season. The storm is forecast to intensify as it moves south over New Mexico on December 22 and 23, where a winter storm warning is in effect. 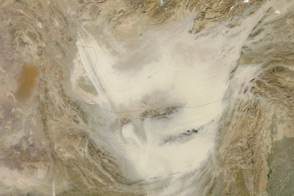 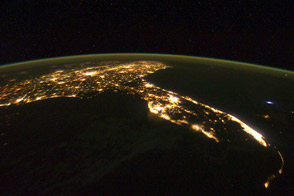