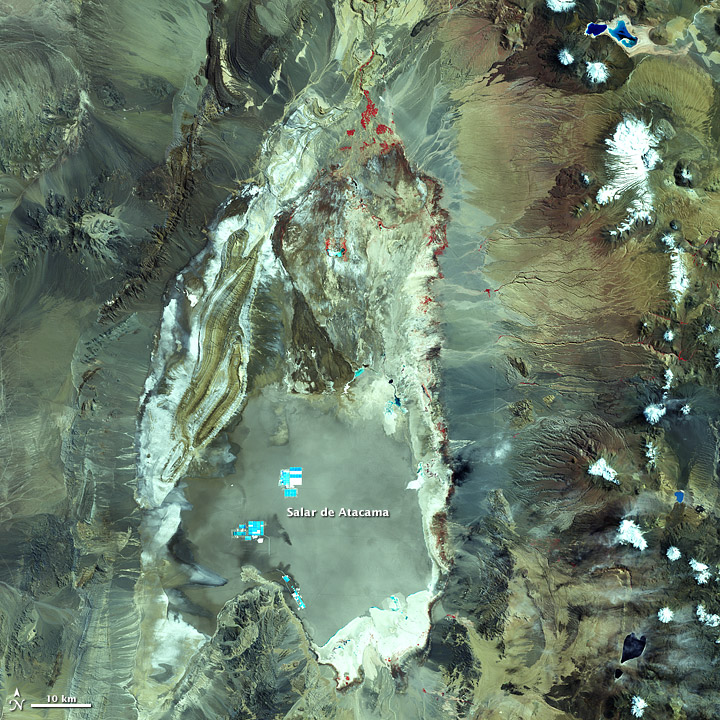 Chile’s Atacama Desert may be the driest place on Earth. Large stretches of the Atacama have gone without moisture for as long as people have been keeping track. Yet some precipitation does fall in the region, and that water helps shape the landscape.

Within this arid environment lies a salt flat, or playa, named Salar de Atacama. The Landsat 7 satellite acquired this false-color image on March 21, 2002. Red indicates vegetation, the most abundant of which occurs around springs that dot the northern edge of the saltpan. Nearby soils that support some vegetation appear tan and brown.

Although it sits at a much higher elevation, the Salar de Atacama resembles California’s Death Valley as a flat area in between mountain ranges. The little precipitation that has fallen has usually drained off the mountains and flowed into nearby valleys, creating alluvial fans.

The salt flat is a geologically young, dynamic system. Occasional floods do reach the saltpan, and flood waters carry gravel, sand, clay, and salt. Heavier materials such as gravel and sand tend to drop out of the water sooner, coming to rest outside the saltpan. Clays and salts can hitch a ride all the way to the playa.

Floods initially stir the sediments inside Salar de Atacama, but material eventually settles into layers of clay and salty water. Because the playa lacks drainage, water only leaves by evaporation. As it evaporates, salts remain behind and form crusts. Inside the saltpan, mottled light blue indicates surface salt crusts.

The white color around the perimeter of the saltpan indicates a zone of clay and carbonate-rich material that alternately forms a crust on the surface and re-dissolves with rising and falling groundwater. Northeast of the playa, white indicates something else: snow and ice on the volcanic peaks. Volcanic rocks and soils range in color from burnt orange to tan.

Around the playa, the false-color green indicates rocks that would appear red to human eyes. Blue indicates older sedimentary rocks (deposited by wind and water) and igneous rocks (formed from cooling lava or magma) that support no vegetation.

Not surprisingly, Salar de Atacama is now mined for salt, and evaporation ponds appear in the middle of the saltpan—rectangular shapes of bright turquoise and white. The salt flat also holds the potential for lithium production from its subsurface brine-bearing waters.