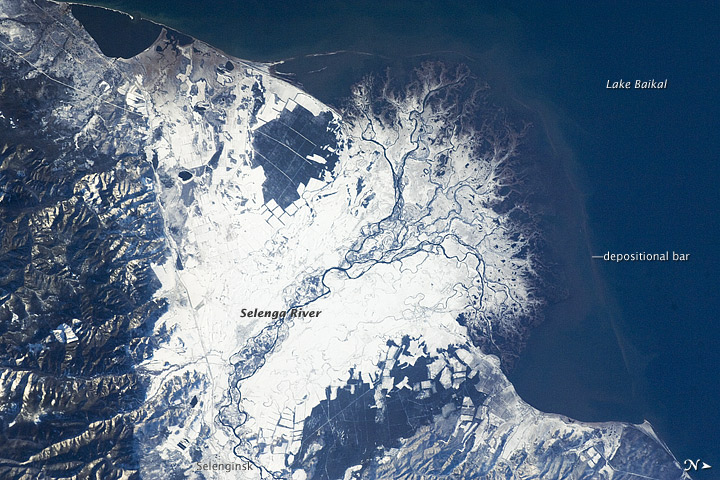 This astronaut photograph from the International Space Station reveals the Selenga River Delta, which is built out into Lake Baikal in Russia. The delta (image center) is lobate in form, with an intricate network of channels and levees surrounded by marshlands. This suggests the development of the delta is governed by the sediment load carried by the river, and any modifications due to lake tides or waves are relatively minor.

Further out into the lake, dark brown depositional bars are visible, forming a rough arc marking the edge of the delta. Snow cover on the river floodplain highlights numerous secondary channels, as well as channels previously occupied by the river but now abandoned. The snow cover also traces the outlines of agricultural fields to the southwest and northeast.

Lake Baikal is a World Heritage Site. The Selenga River is the major contributor of water to Lake Baikal, occupying approximately 82 percent of the watershed area. The wetlands of the Selenga River delta are designated as a RAMSAR site and provide valuable habitat for more than 170 species of birds, including many migrating species. Like Baikal, the Selenga Delta is home to unique ecosystems, including more than 70 rare or endangered species of plants and animals.

Waters of the Selenga River serve many differing uses in both Mongolia and Russia, including agriculture, drinking water, light industry, mining, recreation, and tourism. These uses also contribute to the degradation of water quality, to downstream availability of water, and to ecological impacts. For example, a pulp and paper plant in the city of Selenginsk (lower left) has been tied to high levels of pollution in the river. International efforts to integrate management of the Selenga River basin for ecological and economic sustainability are ongoing.

Astronaut photograph ISS029-E-37915 was acquired on November 3, 2011, with a Nikon D2Xs digital camera using a 125 mm lens, and is provided by the ISS Crew Earth Observations experiment and Image Science & Analysis Laboratory, Johnson Space Center. The image was taken by the Expedition 29 crew. The image has been cropped and enhanced to improve contrast. Lens artifacts have been removed. The International Space Station Program supports the laboratory as part of the ISS National Lab to help astronauts take pictures of Earth that will be of the greatest value to scientists and the public, and to make those images freely available on the Internet. Additional images taken by astronauts and cosmonauts can be viewed at the NASA/JSC Gateway to Astronaut Photography of Earth. Caption by William L. Stefanov, Jacobs/ESCG at NASA-JSC. 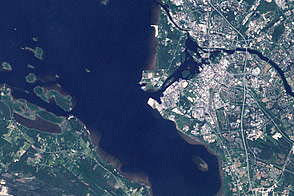