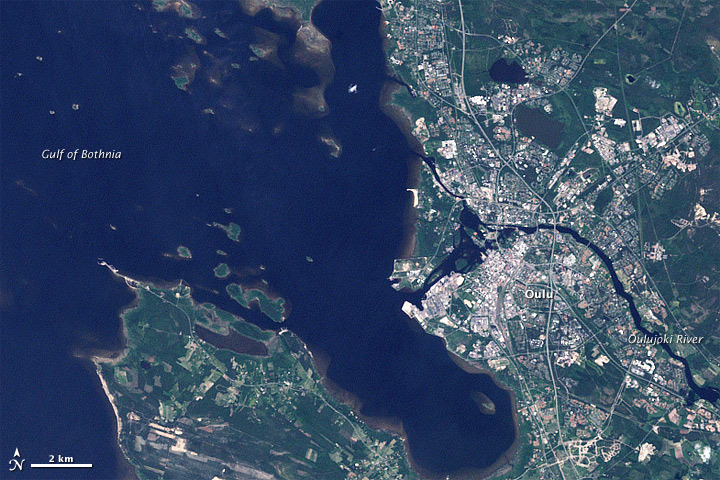 The city of Oulu, Finland, lies at the mouth of the Oulujoki River along the Gulf of Bothnia. The northerly location makes for cool summers and cold, dark winters. Today’s subarctic climate, however, is mild compared to that of its recent geologic history. As recently as 11,000 years ago, the area was buried under a glacier.

The Landsat 7 satellite captured this image of Oulu on June 25, 2001. Urban areas are pale gray, bare ground is brown, vegetation is green, and water is navy blue. The Oulujoki River surrounds tiny islands en route to the sea in this low-lying area.

Geologists surmise that during the most recent ice ages, the Fennoscandian Ice Sheet extended over a large expanse of northwestern Eurasia, reaching its greatest thickness about 20,000 years ago. The ice sprawled over Scandinavia and was thickest over the Gulf of Bothnia. The ice pushed primarily eastward across Finland, scouring away rock debris as it moved. As the climate warmed, the ice front gradually retreated. Roughly 11,000 years ago, the Oulu region was still buried by ice, but 1,000 years later, the ice had retreated westward, exposing western Finland and the Gulf of Bothnia.

Today, Finland’s coastal city of Oulu is subarctic. A little over 11,000 years ago, it was buried by ice.