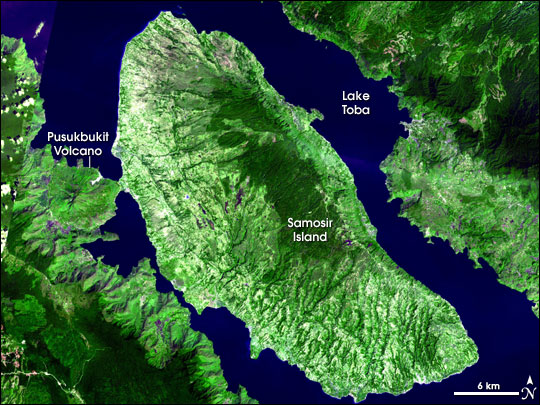 Around 70,000 years ago, the Earth was rocked by the largest volcanic eruption to have occurred in the past 2 million years. Over what was probably a two-week span, thousands of cubic kilometers of debris spewed from Toba Caldera on northern Sumatra. Pyroclastic flows (fast-moving clouds of hot gas, rock fragments, and ash) buried at least 20,000 square kilometers around the caldera. As far away as India, ash from the Toba eruption lies in layers up to 6 meters (about 20 feet) thick; on Samosir Island, the ash layer is more than 600 meters (more than a quarter mile) thick!

Following the eruption, the ground collapsed, leaving the modern caldera, which filled with water to make Lake Toba. Samosir Island is a resurgent volcanic dome, a mound of rock uplifted by pressure from un-erupted magma in the chamber beneath the volcano. The Pusukbukit Volcano on the western shore of the lake also formed after the catastrophic eruption.

Looking at the incredibly lush tropical vegetation that covers much of the landscape, it is difficult to picture the complete destruction of plant and animal life—including human populations—that would have resulted from the eruption. Very few creatures of any kind would have survived across a broad part of Indonesia. “Volcanic winter,” caused by the increase in sunlight-reflecting particles high in the atmosphere, probably lasted several years. The rapid global cooling trend would have had profound consequences for life around the globe.

This image of Toba Caldera was captured by the Advanced Spaceborne Thermal Emission and Reflection Radiometer (ASTER) on NASA’s Terra satellite on January 28, 2006. Images from two overpasses were stitched together to show the entire area. The seam between the two is visible in the upper left corner of the image. Differences in lighting and cloudiness between the two parts of the image reveal that they were not captured at the same time.