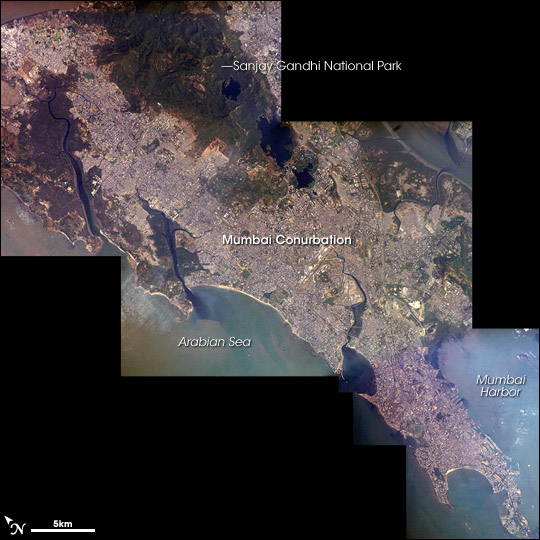 Mumbai (formerly known as Bombay) is a megacity, one whose population is more than 10 million. More than 21 million people live in the greater Mumbai metropolitan region. Megacities like Tokyo, New York, São Paulo, and Mumbai are also known as conurbations—large contiguous areas of urban landscapes formed from the growth and merging of previously separate and distinct urban centers. The Mumbai conurbation includes several municipal entities including Bhiwandi, Kalyan, Thane, and Ulhasnagar.

This image mosaic is comprised of three astronaut photographs acquired within ten seconds of each other as the International Space Station passed over India. Almost cloud-free conditions reveal the continuous urban land cover of the megacity extending north to south across Salsette Island—a distance of nearly 50 kilometers. Sanjay Gandhi National Park, bordered on three sides by the urbanized area, is the largest national park in the world located within city limits. In addition to providing a refuge for native plants and animals (including humans), the park also includes two lakes that form part of the Mumbai drinking water system.

The development patterns (both physical and social) of megacities and urban conurbations are of great interest to ecologists, climate scientists, regional planners, and social scientists. The large-scale conversion of undeveloped and agricultural landscapes to built-up environments alters regional biodiversity, climate, and exposure to natural hazards in significant and sometimes unpredictable ways.

Located along the coast of western India, Mumbai is generally considered to be the most modern of India’s cities, and it is a major economic, transportation, and cultural center. India’s “Bollywood” film entertainment industry is also based in Mumbai.

Astronaut photographs ISS014-E-8741, ISS014-E-8742, and ISS014-E-8744 were acquired November 28, 2006, with a Kodak 760C digital camera using a 400 mm lens, and is provided by the ISS Crew Earth Observations experiment and the Image Science & Analysis Laboratory, Johnson Space Center. The images in this article have been cropped and enhanced to improve contrast. The International Space Station Program supports the laboratory to help astronauts take pictures of Earth that will be of the greatest value to scientists and the public, and to make those images freely available on the Internet. Additional images taken by astronauts and cosmonauts can be viewed at the NASA/JSC Gateway to Astronaut Photography of Earth.

Mumbai is a megacity, one whose population is more than 10 million. More than 21 million people live in the greater Mumbai metropolitan region.