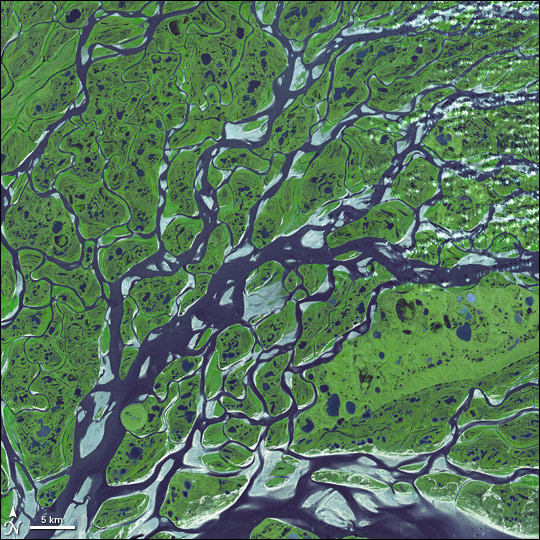 After a 4,400-kilometer (2,734-mile) journey north from the mountains of south-central Russia, the Lena River fractures into myriad streams that fan out across the tundra and empty into the Arctic Ocean via the Laptev Sea. Its far northern location keeps the Lena River Delta frozen for as long as seven months of the year, but during the short summer, it thaws into a wetland of tremendous ecological importance. Climate scientists are also interested in the area because changes in the volume of water emptying into the sea as well as the depth of the permafrost (soil that remains frozen year round) are indicators of Arctic climate change.

This image of part of the Lena Delta was captured by the Advanced Spaceborne Thermal Emission and Reflection Radiometer (ASTER) on NASA’s Terra satellite on July 16, 2005, during the area’s short summer. Just beyond the lower left corner of the image is where the main channel begins to fan out. The two largest streams bend back to the east (along the bottom of the image) and northeast, and then they themselves split into additional streams, which meander across the tundra. Vegetation-covered areas are green, while bright white areas are probably places that were scoured by the annual spring floods. Mudflats and other areas covered by shallow water appear light blue.

The hundreds of lakes and ponds that dot the tundra occur because each summer, only 20-40 centimeters (about 8-16 inches) of the ground thaws. The permafrost below acts like the cement bottom of a swimming pool, keeping the lakes from draining. In 2005, scientists made a survey of northern Siberia’s lakes and determined that 11 percent of them disappeared between 1970 and 2002. The culprit appears to be thawing permafrost. As the permafrost melts, it cracks open under the lakes, allowing the water to drain deeper into the ground.

The Lena River fractures into myriad streams that fan out across the tundra and empty into the Arctic Ocean. During the short summer, it thaws into a wetland of tremendous ecological importance.