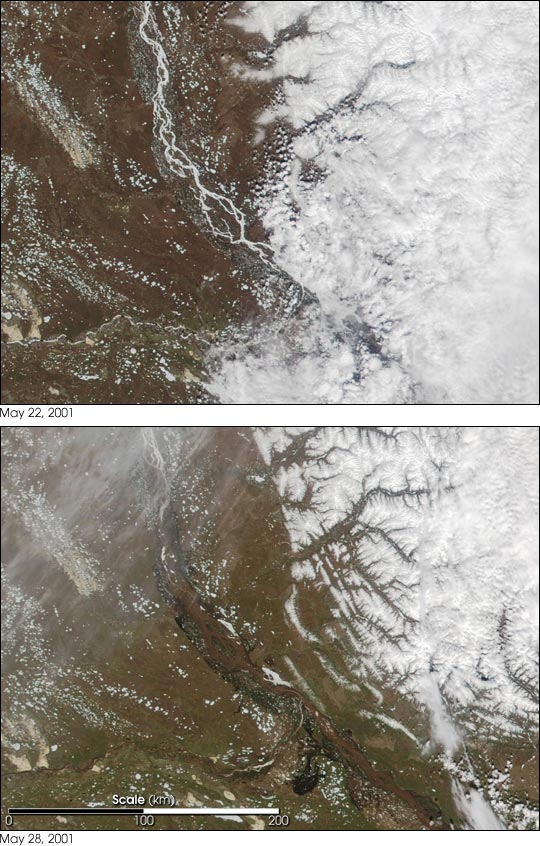 What a difference a week can make! This pair of true-color images acquired by the Moderate-resolution Imaging Spectroradiometer (MODIS) on NASA's Terra satellite show the spring thaw and resulting flooding of the Lena River, a principal waterway of eastern Siberia. The first image, acquired on May 22, 2001, shows the Lena as a mostly frozen, white ribbon running north. An eastward flowing tributary, the Vilyuy, also appears frozen. In the second image, taken only 8 days later, large sections of the Lena, as well as the Vilyuy appear to be almost completely thawed. The formerly white ribbon of the river now appears decidedly brown, likely indicating sediment churned up by high water.

The region is experiencing its worst flooding in one hundred years, with hundreds of thousands of people being affected by the floodwaters that have resulted from the melting of the snow pack accumulated over a particularly harsh Siberian winter. Explosives are being detonated in many places to dislodge huge blocks of ice that are backing up rivers and exacerbating flooding.

The Lena River is one of the longest rivers in the world. It flows northeast and then north from its source in the Baikal Mountains south of the Central Siberian Plateau, and it empties into the Arctic Ocean via the Laptev Sea. At the mouth of the Lena River is a delta that is about 250 miles wide. The delta is frozen tundra for about 7 months of the year, but spring transforms the region into a lush wetland for the remainder of the year. Part of the area is protected as part of the Lena Delta Wildlife Reserve. 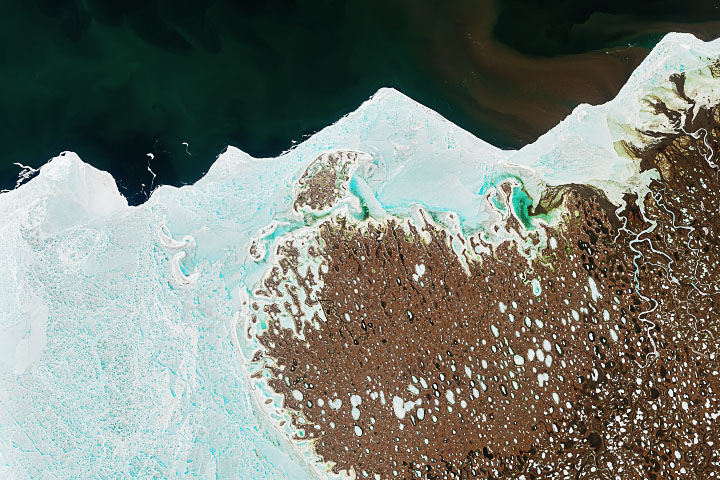 Over the last 7,000 years, the Lena River—which moves millions of tons of sediment a year—has constructed the Arctic Ocean’s largest delta.