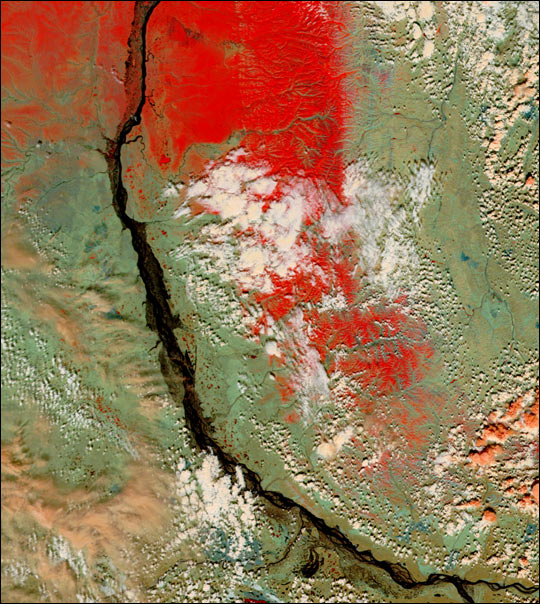 Nearly every year in the late spring, ice blocks the flow of water at the mouth of the Lena River in northeastern Russia and gives rise to floods across the Siberian plains. This year’s floods can be seen in this image taken on June 2, 2002, by the MODIS (Moderate Resolution Imaging Spectroradiometer) instrument aboard the Terra satellite. The river runs down the left side of the image, and its delta is shrouded in ice (red) at the top of the image. Usually, the river would resemble a thin black line in MODIS imagery.

The Lena River, which is Russia’s longest, flows 2,641 miles (4,250 kilometers) south to north through Siberia and into the Laptev Sea. In the winter, the river becomes nearly frozen. In the spring, however, water upstream thaws earlier than water at the mouth of the river. As the southern end of the river begins to melt, blocks of ice travel downstream to the frozen delta, pile up, and obstruct the flow of water. Flooding doesn’t always occur on the exact same parts of the river every spring. The floods hit further south last year. If the flooding grows severe enough, explosive charges are typically used to break up the ice jams.

In these false-color images land areas are a dull, light green or tan, and water is black. Clouds appear pink, and ice comes across as bright red.