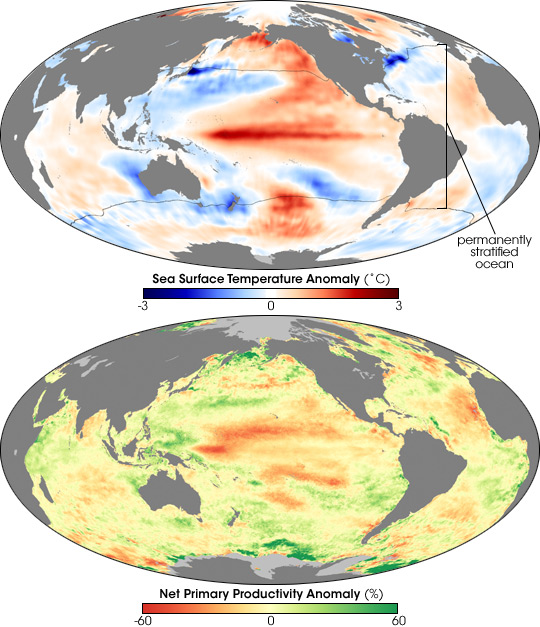 Why do warmer temperatures have a negative influence on phytoplankton growth? The most likely explanation is that the warmer the surface waters become, the less mixing there is between those waters and deeper, more nutrient-rich water. As nutrients become scarce at the surface, where phytoplankton grow, productivity declines. The effect is most obvious in the part of the world’s oceans that scientists describe as the permanently stratified ocean, bounded by black lines in the images. “Permanently stratified” means that rather than being well-mixed, there is already a distinct difference in the density of warmer, fresher water at the surface and colder, saltier water deeper down. Seasonal stratification occurs in other parts of the ocean, but in the labeled area, the stratification exists year-round.

In this situation, with “lighter” (i.e., less dense) water on top, and “heavier” (denser) water below, there is little vertical mixing, and nutrients can’t move to the surface. As surface water warms, the stratification, or layering, becomes even more pronounced, suppressing mixing even further. As a result, nutrient transfer from deeper water to surface waters declines, and so does phytoplankton productivity.

“The evidence is pretty clear that the Earth’s climate is changing dramatically, and in this NASA research we see a specific consequence of that change,” said oceanographer Gene Carl Feldman of NASA’s Goddard Space Flight Center. “It is only by understanding how climate and life on Earth are linked that we can realistically hope to predict how the Earth will be able to support life in the future.”