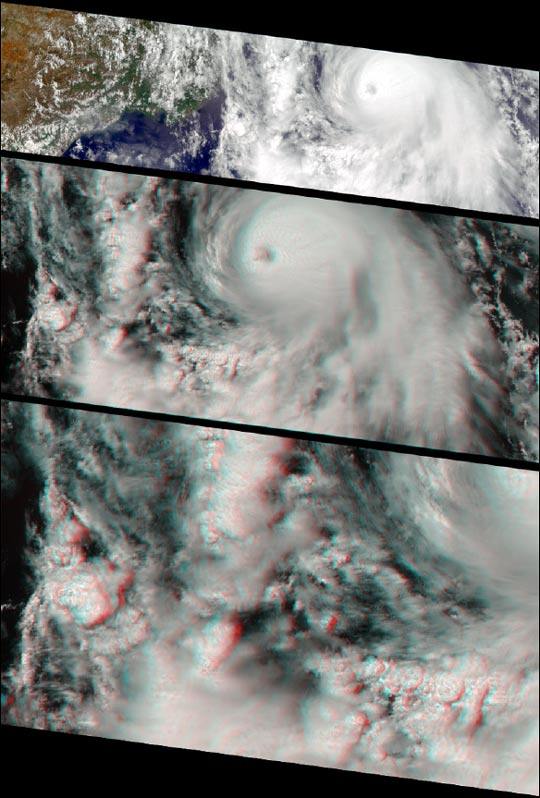 With winds reaching 155 mph, this year’s Hurricane Carlotta became the second strongest eastern Pacific June hurricane on record. These images from MISR show the hurricane on June 21, the day of its peak intensity. The pictures are oriented so that the spacecraft's flight path is from left to right; north is at the left.

The middle image is a stereoscopic “anaglyph” created using MISR’s nadir camera plus one of its aftward-viewing cameras, and shows a closer view of the area around the hurricane. Viewing with red/blue glasses (red filter over the left eye) is required to obtain a 3-D stereo effect.

Near the center of the storm, the eye is about 25 km in diameter and partially obscured by a thin cloud. About 50 km to the left of the eye, the sharp drop-off from high-level to low-level cloud gives a sense of the vertical extent of the hidden eye wall. The low-level cloud is spiraling counterclockwise into the center of the cyclone. It then rises in the vicinity of the eye wall and emerges with a clockwise rotation at high altitude. Maximum surface winds are found near the eye wall.

The bottom stereo image is a zoomed-in view of convective clouds in the hurricane's spiral arms. The arms are breeding grounds for severe thunderstorms, with associated heavy rain and flooding, frequent lightning, and tornadoes. Thunderstorms rise in dramatic fashion to about the same altitude as the high cloud near the hurricane's center, and are made up of individual cells that are typically less than 20 km in diameter. This image shows a number of these cells, some fairly isolated, and others connected together. Their three-dimensional structure is clearly apparent in this stereo view.

Into the Eye of the Storm