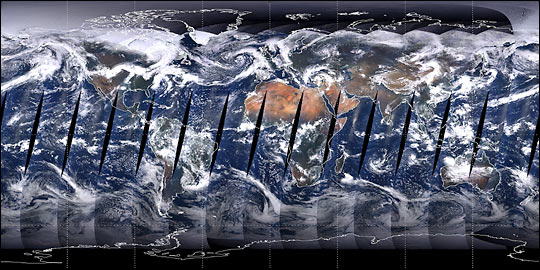 This spectacular, full-color image of the Earth is a composite of the first full day of data gathered by the Moderate-resolution Imaging Spectroradiometer (MODIS) aboard NASA’s Terra spacecraft. MODIS collected the data for each wavelength of red, green, and blue light as Terra passed over the daylit side of the Earth on April 19, 2000. Terra is orbiting close enough to the Earth so that it cannot quite see the entire surface in a day, resulting in the narrow gaps around the equator. Although the sensor's visible channels were combined to form this true-color picture, MODIS collects data in a total of 36 wavelengths, ranging from visible to thermal infrared energy. Scientists use these data to measure regional and global-scale changes in marine and land-based plant life, sea and land surface temperatures, cloud properties, aerosols, fires, and land surface properties.

Notice how cloudy the Earth is, and the large differences in brightness between clouds, deserts, oceans, and forests. The Antarctic, surrounded by clockwise swirls of cloud, is shrouded in darkness because the sun is north of the equator at this time of year. The tropical forests of Africa, Southeast Asia, and South America are shrouded by clouds. The bright Sahara and Arabian deserts stand out clearly. Green vegetation is apparent in the southeast United States, the Yucatan Peninsula, and Madagascar.