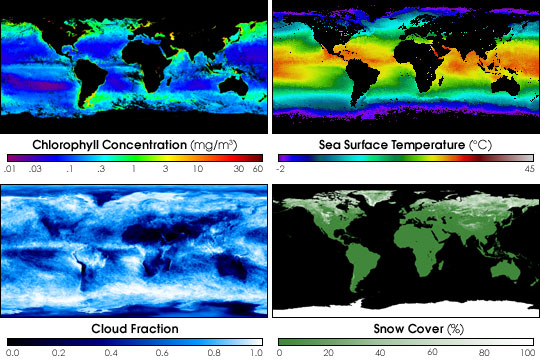 One of the best places to study Earth is from space. NASA satellites continually orbit the globe, collecting information about Earth’s ocean, atmosphere, and land surfaces. Satellites can even monitor the activity of life forms, such as phytoplankton, from their remote vantage points. Satellite imagery provides the greatest benefit to the most people when it can be analyzed by anyone with an interest, so NASA strives to make satellite imagery as accessible as possible. A new tool for that purpose is NASA Earth Observations (NEO).

These four images represent a sampling of the datasets available in NEO. Each image represents a monthly global dataset from October 2006, collected by the Moderate Resolution Imaging Spectroradiometer (MODIS) on NASA’s Terra and Aqua satellites. Like a digital camera, MODIS collects information in gridded boxes, or pixels, and Cloud Fraction measures the portion of each pixel that was covered by clouds, while Snow Cover provides a percentage of each pixel that was covered in snow in October 2006. Chlorophyll Concentration shows where and how much phytoplankton grew over the course of the month, and Sea Surface Temperature shows the average ocean temperature by location during the same time period.

NEO represents a new way to browse, search, and retrieve imagery from NASA Earth science datasets. NEO contains global and regional imagery that users can download in a variety of formats: PNG, JPEG, GeoTIFF, and Google Earth. Additionally, users can resize those images, and download them in color or grayscale. Users can also import NEO images directly into NASA’s Image Composite Explorer (ICE) tool to perform basic analysis and explore relationships between datasets.

MODIS imagery courtesy of the MODIS Land, Atmosphere, and Ocean Science Teams. Special thanks to Reto Stockli and Norman Kuring for their assistance. NEO architecture and development by Kevin Ward.