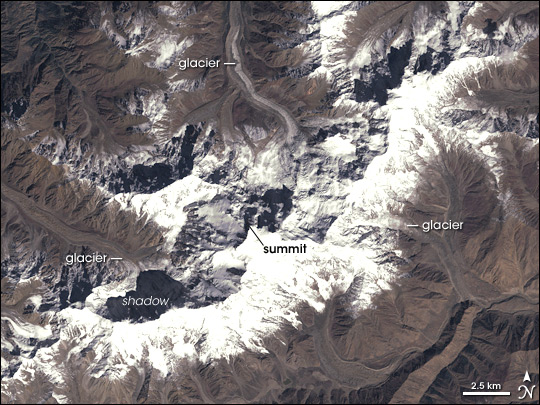 Nanga Parbat means “Naked Mountain” in Pakistan’s Urdu language. The name is apt: Nanga Parbat is the westernmost mountain in the Himalaya, and unlike many other mountains in the range, Nanga Parbat stands alone. Well separated from the nearest tall peak, the 8,215-meter (26,658-foot) summit is a commanding presence. The summit is the ninth highest in the world, and like all such high mountains, it can be a very perilous journey to the summit. The first recorded successful expedition to the summit was led by German climber Herman Buhl in 1953; previous attempts to reach Nanga Parbat’s peak had killed 31 people.

In this satellite image, Nanga Parbat’s snow-covered ridgeline runs from lower left to upper right, and it casts black shadows onto the terrain to the northeast. Several of the valleys coming off the mountain are filled with grayish-white glaciers. Although these glaciers flow down the sides of Nanga Parbat to the northwest, north, and south, all waters from the mountain ultimately flow north into the Indus River (visible in the large image at upper left).Water from glaciers running south joins an existing stream at the base of the mountain, which turns east (lower right) and connects with other streams that flow north and feed into the Indus River.

The permanent snowcap of Nanga Parbat and the glaciers feeding down from its heights are important parts of the national water supply for Pakistan. This satellite image was obtained on September 30, 2001, just past the end of summer, when as much snow as is likely to melt in the year has done so. A spring image of the same area would show a continuous expanse of white reaching down into many of the valleys below.

This photo-like image of Nanga Parbat and its immediate surroundings was obtained by the Landsat 7 satellite’s Enhanced Thematic Mapper Plus (ETM+) instrument. One advancement in ETM+ compared to instruments on earlier Landsat satellites is a high-resolution panchromatic band. The “pan band” observes the surface of the Earth with fully twice the resolution (level of detail) of the regular sensors, but it does so at the expense of color sensitivity. The pan band observes light over a slightly wider range of wavelengths than the human eye can see, so satellite images that incorporate panchromatic observations require some corrections to make the imagery look like a natural-color photograph. In this image, Landsat’s panchromatic observations have been adjusted to make the brilliant white snow on the peaks of the Himalaya and the arid brown land of the deep valleys below approximately the same color they would appear to the human eye. The large format image shows the incredible detail in this rough and mountainous landscape, showing details as small as 15 meters (50 feet).