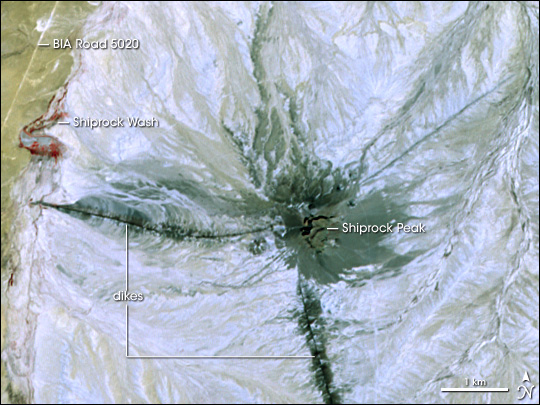 In the northwestern corner of New Mexico, a ragged dome of dark volcanic rock emerges from the dusty plateau like the sails of a ship against the horizon. Long, narrow ridges called “dikes” flank the dome, which is known in English as Shiprock Peak, and in Navajo as Tsé Bit'a'í, “the winged rock.” Millions of years ago, a volcano stood in this place. As its activity decreased, the magma feeding the volcano hardened into solid rock, crystallizing part of the volcano’s “circulatory system.” Over eons, the softer overlying rock eroded, exposing the hidden workings of the ancient volcano.

This image of the Shiprock formation was captured by the Advanced Spaceborne Thermal Emission and Reflection Radiometer (ASTER) sensor on NASA’s Terra satellite on June 2, 2006. The image is not photo-like; it uses infrared light to make certain features more obvious than they would be in a natural-color image. Lush vegetation appears bright red, for example, while different kinds of rock with less vegetation appear in shades of gray, black, and tan. Shiprock Peak itself is the hardened magma that was in the central shaft of the volcano, while the dikes stretching out from the peak are the remains of magma feeder channels. The formation is bounded on the west by Shiprock Wash. Beyond is Bureau of Indian Affairs Road 5020.

Shiprock, or the Winged Rock, is located on Navajo Nation lands, and the peak is part of many legends and stories. According to one story, the peak was once the nesting place of a giant bird of prey—the last of 16 monsters that the Hero Twin gods had to slay before human beings could come to live in the present world.

NASA image created by Jesse Allen, Earth Observatory, using data provided courtesy of NASA/GSFC/METI/ERSDAC/JAROS, and U.S./Japan ASTER Science Team. Thanks to Robert Johnson of the Navajo Nation Museum for information on the mythology of Tsé Bit'a'í.

This detailed astronaut photograph shows Big Ben Volcano on Heard Island, north of Antarctica, including Mawson Peak and the Gotley and Lied Glaciers.