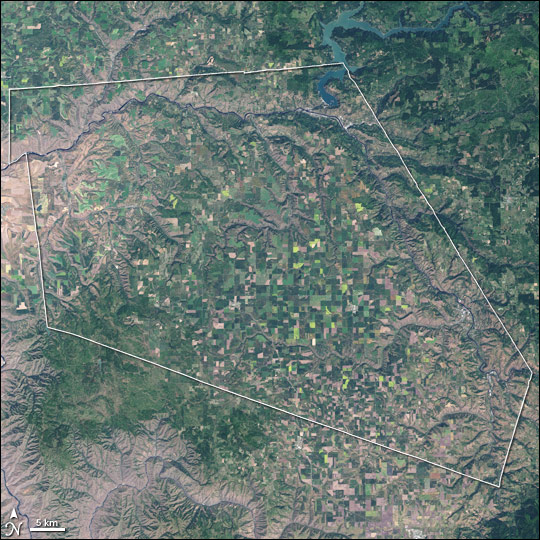 The Clearwater River cuts canyons in the hills and prairies of Northern Idaho as it winds through the 770,000 acres that make up the Nez Perce Reservation. Approximately 3,200 members of the Nimi'ipuu (Nez Perce) Tribe live on the land with non-tribal settlers. As this Landsat-7 image shows, the reservation contains valleys covered with the variegated green squares created by agricultural fields, grass- and brush-covered hills, and canyons cut into dark basalt lava flows by the Clearwater. The image was taken on July 9, 1999.

By area, the reservation is the largest in Idaho, but it is a fraction of its former size. It was created by an 1855 treaty between the Nimi'ipuu and the United States government, which set 7.5 million acres of land in Idaho and Oregon aside for the tribe. Shortly after the treaty was signed, gold was discovered in Oregon, and a subsequent treaty in 1863 cut the reservation down to its current size. In 1887, the Dawes Act allowed homesteaders to claim land within the reservation, so that today, the tribe controls 86,248 acres of land and individual members own an additional 37,950 acres. The remaining land is owned by non-tribal settlers.

Sections of the Nimi'ipuu’s much broader traditional homeland are part of the Nez Perce National Historic Park. The distributed park consists of 38 sites throughout Idaho, Oregon, Washington, and Montana that are important to the culture and history of the Nimi'ipuu. The sites, several of which are included in this image, range from traditional gathering places and rock formations that are the basis of tribal myth to the campsite occupied by Lewis and Clark as they waited for snow to melt in the Rocky Mountains before returning to the East.

Information in this caption came from the National Park Service, the Public Broadcasting Service, and the Nez Perce Tribe. To learn more, please see the following web sites.