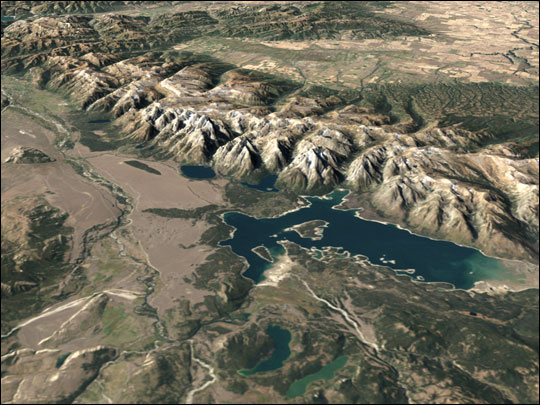 Grand Teton rises to 13,770 feet (about 4,200 meters), and twelve of the Teton peaks in the range rise above 12,000 feet (3,660 m), more than a mile above the valley below (known as Jackson Hole). They form the youngest section of the Rocky Mountains, yet conversely their uplifting exposes some of the oldest rock formations in North America. The gradual slope on the western side of the peaks reflects the uplifting and tilting of the section of the North American crust shown here. The Snake River originates here, draining into and out of Jackson Lake. Tributaries on the western side of the range also drain into the Snake River where Henry’s Fork merges with the main river south and west of the park near Idaho Falls. The Snake River forms the headwaters for the Columbia River, the largest river in the Pacific Northwest.

The Teton Range was set aside as a National Park in 1929 after decades of contention with local ranchers and other land interests, and at that time only included the Teton Range and glacial lakes at their base. The area around Jackson Lake, including national forest and other federal lands, were declared as a national monument in 1943. The two were merged, and a 35,000-acre section added by donation by John D. Rockerfeller, Jr., to form the current Grand Teton National Park in 1950.

This visualization combines simulated natural color imagery from the Landsat 7 Enhanced Thematic Mapper Plus (ETM+) instrument with elevation data derived from the Shuttle Radar Topography Mission (SRTM) and the United States Geological Survey’s Digital Terrain Elevation Data (DTED). The elevation extrusion shown here is to proper scale with no vertical exaggeration. The view shown simulates the view of the park and its immediate surroundings from an elevated camera looking at the park to the south and west. These ETM+ data were acquired on September 23, 2002.