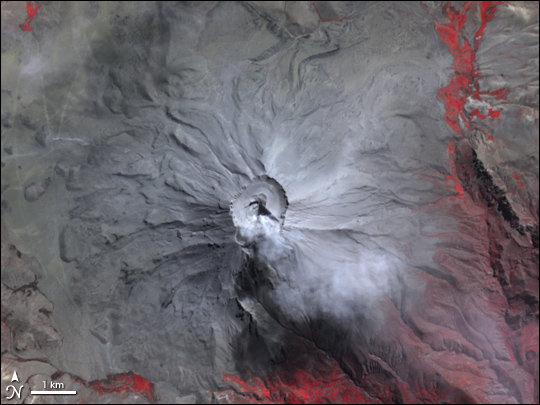 A faint white plume rose from the summit of the Ubinas Volcano on May 8, 2006, when the Advanced Spaceborne Thermal Emission and Reflection Radiometer (ASTER) on NASA’s Terra satellite captured this image. Peru’s most active volcano, Ubinas forced evacuations on April 21, after a series of explosions sent ash, gas, and lava fragments more than three kilometers into the air, said the U.S. Geological Survey in its weekly Volcanic Activity Report. The fumes caused respiratory problems, and livestock fell ill or died after eating ash-coated grass.

Evidence that people live on the volcano’s fertile slopes is visible in this image. Crop-planted fields are bright red flecks against the dull natural vegetation on the southern and eastern slopes of the volcano. In the lower right corner of the image, the vegetation is a duller tone of red than elsewhere in the image. The difference in color is at least partially because there is less agriculture in the region, but may also have resulted from ash dusting the ground.

The volcano itself has steep, lava-strewn slopes topped by a round caldera. The cliff-like caldera walls drop 150 meters to the caldera floor, where a deep, funnel-shaped vent opens. Ubinas sits in southern Peru, due west of Lake Titicaca.

Ash and volcanic gas rose from the Ubinas Volcano in Southern Peru in late April and early May 2006, prompting evacuations. The volcano emitted more plumes in June, July, and August.

After its initial eruption on May 2, 2008, Chile’s Chaitén Volcano remained active in the days and weeks that followed, releasing a near-constant plume and blanketing the region in ash. This false-color image uses thermal radiation to make an image of the volcano and its surroundings. The hottest area in this picture is at the lava dome in the volcano’s caldera. The purple-black plume blowing northeast from the summit is much colder.